Tales of Vesperia: Definitive Edition is coming out this January, letting fans replay or play for the first time one of the most well-loved titles in the series. A high point for many fans of the original was protagonist Yuri Lowell, a no-nonsense former soldier that was ready to take on the world, and Troy Baker's acting helped elevate the character. Unfortunately, Baker says he didn't even know about the project and wasn't asked to return.

....wow. Yeah, had no idea about this. Was never approached to do any additional lines/scenes. Pretty gutted, to be honest. Love this character so much, would’ve jumped at the chance to step into those boots again. https://t.co/nwDqJGAoWH

The tweet refers to a new video of Tales of Vesperia: Definitive Edition provided by Bandai Namco during the Tokyo Game Show. When the publisher ported Tales of Vesperia to PlayStation 3 in Japan, they added a new character and associated scenes, which of course included interaction with the rest of the group. The entire game was also voiced, as opposed to the more selective voice work in the 360 version. Since Bandai Namco decided not to bring the PlayStation 3 version over, those new parts were never voiced in English, until now.

You can see an example of a new scene below.

While it seems like they got the rest of the cast back together, Yuri sounds fairly different. To make matters stranger, in other examples, he retains his Troy Baker voice. One reason for this might be that Troy Baker has become a lot more prominent as a voice actor than he was in 2008. In the intervening decade, he has voiced Booker from Bioshock Infinite, Joel from The Last of Us, Talion from Shadow of Mordor, Ocelot from Metal Gear Solid V, and dozens more roles. Maybe Bandai didn't want to put up the money they thought he would require these days.

Regardless of why, it is definitely jarring, though the game's inclusion of dual audio might solve that problem for anyone who wants to use the Japanese language track.

Tales of Vesperia: Definitive Edition releases on January 11 for PlayStation 4, Xbox One, Switch, and PC. 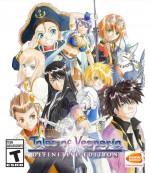