Please Try To Explain What's The Deal With Peachette

In yesterday's Nintendo Direct, Nintendo revealed that Wii U launch title New Super Mario Bros. U would be coming to Switch with some small bits of new content. One addition is Toadette, taking the place of blue Toad Buckenberry, and joining as a playable character in the game. You can check her out in the trailer below.

Just kind of thrown in there is the fact that, when Toadette grabs a new crown power up, she becomes Peachette, who resembles the princess of the Mushroom Kingdom and has her same floating power.

Does that mean Toadette is Peach? Or Peach used to be a Toad? I went through and checked and, aside from some Mario spin-offs, Toadette and Peach have never interacted. The spin-offs themselves also have people racing and partying alongside their baby selves (which opens a related can of worms), so the rules are already out the window there.

Perhaps more bafflingly, Peachette has dark grey eyes while Peach herself has blue ones.  So I did what any sane person would do: I went to Twitter to get theories for Peachette.

One popular theory appears to be that Toadette is just a body double for Peach.

toadette is almost never in the limelight, peach is
peach is almost always kidnapped, toadette never is

she's the royal body double for Peach :P (took over for Birdo after the Mario & Luigi games)

One theory is that Toadette to Peach power ups are part of the leadership selection process for the Mushroom Kingdom.

people have been asking where peachette fits into the mario theory of royals and thralls and the answer, for now, is as follows: peachette is an ascended thrall. a toad is a thrall equivalent to a koopa troopa. meanwhile peachette is to peach as a koopaling is to bowser.

Toadette’s transformation into “Peachette” has horrifying implications.
Peach is not a character, rather it is a title given to the current ruler of the Mushroom Kingdom, a Toadette transformed into a Peach. In this essay I will pic.twitter.com/fZlKLrcQjI

Then there's just...the other theories.

"In this essay I will explain how Toadette (originally Peachette) is the original ruler of the Mushroom Kingdom, but after a thousand years of rule she became tired and decided to live a simpler life as a Toad. In her stead she created Princess Peach using the ancient DNA of pic.twitter.com/r6FWwWV4Qm

I'm so confused by the Peachette lore

Are all humans just... Super Mushroomed Toads? Is Peach an advanced Toad all along? Why do Mario and Luigi not turn into Toads? Is Toadette actually Peach's sister? Why is she forced into a permanent Toad form? I'm so confused pic.twitter.com/DBAKypcUDB

Peachette introduces some disturbing implications to how Toads work in the Mario universe.
Are Toads really just larval people in this world.
When puberty hits, does a Toad morph into a man.
Do Toads gradually grow noses and their voices get deeper.

With the advent of Super Mario Bros U Deluxe and Peachette Revelations, a closer inspection is warranted. pic.twitter.com/xqQeVgXfyY

So basically, no one has any idea. Do Toads become Mario? When Bowser kidnapped all those Toads in bags in Super Mario Bros., was he trying to grow his own Peach? Is this why Peach changed her name from Princess Toadstool? If Peach got damaged, would she revert to Toadette?

Hit us up with your Toadette theories in the comments below. 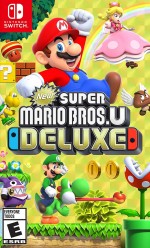