Fist Of The North Star: Lost Paradise's Kiryu DLC Will Be Free For Two Weeks

Fist of the Northstar: Lost Paradise is, in many ways, a Yakuza game. That isn't surprising, considering it's from the Yakuza studio, and even features Kazuma Kiryu's voice actor Takaya Kuroda in the role of protagonist Kenshiro. Now Sega has announced that players can match the voice and gameplay style to the character model and just straight up use Kiryu's looks in Lost Paradise. You can check out a trailer of the cosmetic outfit in action below.

The DLC, which replaces Kenshiro in gameplay and some cutscenes with Kiryu's Yakuza Kiwami model, is free from the game's launch for two weeks. This means you have to get go "purchase" it for free within those fourteen days or it costs money after.

If you miss out on it, it's no big deal, because it doesn't change the gameplay or story at all. But if the Fist of the Northstar world is alienating to you and you need a little grounding of Tokyo to make it more palatable, your old buddy Kiryu is happy to help out. Fist of the Northstar: Lost Paradise is releasing on October 2 on PlayStation 4. 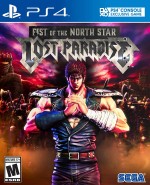