At Sony's pre-Tokyo Game Show event last night, Sega announced that the previously announced Space Channel 5 VR that was hurtling toward a PC headset near you is also coming to PlayStation VR. You can check out a trailer for the game below.

The VR version has been available in Japanese arcades for over a year now, with a port announced for Oculus and Vive in Japan a few months back. Now the VR experience of taking space journalist Ulala through multiple levels where she dances to a rhythm to defeat invading aliens is coming to PlayStation VR, as well.

Space Channel 5 was one of the Dreamcast's most well-known original games and eventually got ported to the PlayStation 2 along with its sequel.

The arcade game saw a limited release in the west as Space Channel 5: Kinda Funky News Flash, but it's unknown if the ports for the PC and PSVR will make it west, or if they will retain Michael Jackson's cameo if they do. 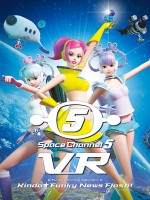