Square Enix has revealed today that Final Fantasy Crystal Chronicles, a four-player co-op action RPG that originally released on the Nintendo Gamecube in 2004, will be coming to the PlayStation 4 and Switch with online play in 2019. You can see the teaser trailer below, which shows the briefest bit of gameplay for the re-release.

The trailer shows players joining together from around the world, confirming that online play will be in the remastered version. That solves a major criticism of the game from its release over a decade ago, where co-op required multiple Gameboy Advance consoles and link cables extending to the Gamecube to play. The setup was cumbersome and expensive and limited the game's reach.

The title was notable for being the first Final Fantasy title on a Nintendo system since Square had cut ties with Nintendo in the mid-90s. In 2001, Sony purchased an 18.6% stake in Square to help bail the RPG giant out after losses from the production and subsequent failure of Final Fantasy: The Spirits Within, which prevented Square from bringing their major series to competing consoles. This was solved by creating a shell corporation called The Game Designer's Studio, the official developer of Crystal Chronicles, which was free to use the Final Fantasy name. The Game Designer's Studio was used for other dealings over the years until it finally closed after serving as a vector to facilitate the acquisition of arcade legend Taito.

Final Fantasy Crystal Chronicles Remastered Edition will release on PlayStation 4 and Switch in 2019. 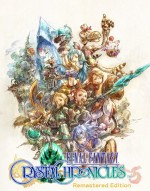