Another of what was likely to be a Nintendo Direct reveal today, Final Fantasy XV Pocket Edition was abruptly given a launch trailer announcing release on PlayStation 4, Xbox One, and soon Nintendo Switch. You can catch the trailer below.

The remade title is based on Final Fantasy XV but optimized for mobile devices. The story and voice acting are identical to the console game, but it has been transformed into a more streamlined and cutesy version. At the time of announcement, Square Enix intimated that it would also be a good fit for Switch, but they had not revealed anything then.

The PlayStation 4 and Xbox One store page listings for the title are up, but not the Switch page yet. 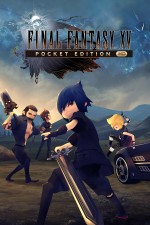