Moving Toward The Magical In Assassin's Creed Odyssey

Asssassin’s Creed has always found itself at the nexus of science and historical fiction, trying to marry the idea of machines and genetics to what-if scenarios from recorded human history. Ubisoft's grip on historical accuracy has loosened game by game, and Assassin’s Creed Odyssey seems to be seizing the fantastical with both hands.

This series has had brief flirtations and full-on entanglements with the First Civilization (also known as the Precursor Race or the Isu). This highly intelligent race created humans as a potential workforce and eventually lost control over them, leading to their own decline. With Assassin’s Creed Odyssey becoming the earliest game in the series, ahead of even the creation of the Assassin Brotherhood, it seems like the Isu still have some influence on the world before Origins.

Ubisoft provided us a new gameplay demo of Odyssey showing a fairly late-game mission on the island of Lesbos in the Aegean Sea. Our assassin, who could be either Alexios or Kassandra (we chose Kassandra), comes across a group attempting to lynch a young woman. The person at the center of it all, Bryce, is accused of being a worshipper of a dangerous forest creature named the Writhing Dread and sacrificing her girlfriend Ligeia to the monster. Bryce emphatically denies this, but the mob will hear none of it, and Kassandra’s decision to aid her leads to killing the group in Bryce’s defense.

Bryce leads Kassandra to the dread ruins, where she was to meet her lover Ligeia earlier. Ligeia’s tribe is called the Daughters of Artemis, a community of female hunters that trained in the petrified temple long ago, and believed it held a sacred artifact. Bryce arrived later to their meeting in order to bring her girlfriend a rose, only to find Ligeia missing and presumably inside the temple. According to Bryce, the Daughters of Artemis held on to a key for the temple in their village, which she tasked Kassandra to bring back. She also mentioned that a mercenary had claimed to kill the creature before and could possibly provide tips.

After getting the key, and worrying about the lack of time, we warped to the temple and opened it up. Bryce ran ahead as Kassandra followed the path of human statues, foreshadowing a confrontation with the stone-eyed Mesuda herself. There was no mask, no Scooby Doo-like exposure of a ne'er-do-well in a costume, the mythological creature herself stood in front of Kassandra aiming her deadly gaze.

You can check out some of the quest below.

This is the interesting path that Assassin’s Creed Odyssey has taken. Unlike previous installments that lean into pseudo-scientific explanations for seemingly magical events, the fantastical and chimeric is old hat in Odyssey, perhaps even passé. No one questions whether the myths of the past are true or judges you for pursuing a lead that ends at the doorstep of a snake-haired Medusa. They judge you because those things are evil and anyone tinged by their association is beyond saving at best. They are known quantities in this world and that’s so absurd that it honestly feels fresh.

Jonathan Dumont explained that you can’t really do ancient Greece without embracing the mythology, and research was especially done into the adventures of Heracles, more commonly known in the west as the Roman Hercules, to pull monsters and misfits from the mythology.

“It is part of the fabric of Greece, what they believed in,” Dumont explained. “It’s their interpretations of their gods and their mythology. We felt if we didn’t include it, it would have been a little bit weird. If there’s a time period where it’s much more of a mix of myths and history, it is ancient Greece." 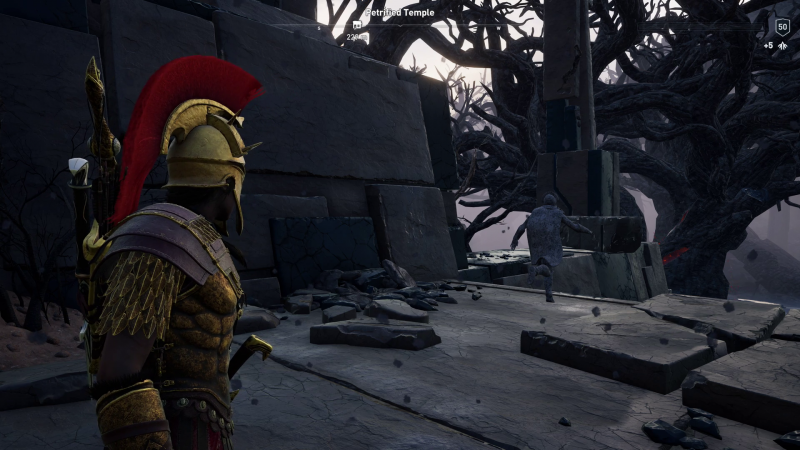 Assassin’s Creed Origins, the previous title starring the Brotherhood founder Bayek in ancient Egypt, featured some degree of fantasy from the otherwise grounded story – especially in the DLC. Odyssey is taking this a step further by integrating this level of fantasy into its main campaign, not just DLC and spin-offs that can be explained away as non-canon.

Ubisoft is not eager to explain how Assassin’s Creed Odyssey has actual myths and monsters when no further games make note of them, but did offer a few hints. While giving his presentation, Dumont commented that the First Civilization’s proximity to this time period might have some effects. Considering that they created humans for personal use, it is possible that the Isu were experimenting with the creation of other creatures, as well.

Later, Dumont even hinted it might just be a glitch in the Animus.

“With the first civilization side of things, we’re going to do a bit more of a dive into that and how it links to [the mythology],” Dumont told us. “Is it a simulation within a simulation? You’ll discover that when you play it. It is tied to artifacts, it is tied to the first civilization, and you do wield an artifact as a weapon. So we really wanted to embrace that for our game because it is a big part of our franchise.”

While the game fully incorporates the mythology, it is still at its heart a story about humans and their own willingness to kill each other. The introduction of giant wolves does not change that man’s greatest enemy is still man, and Assassin’s Creed Odyssey still keeps its grip on that subject matter. The game is still more Assassin’s Creed than The Witcher, even if the occasional boss turns you to stone with her gaze.

For more on Assassin's Creed Odyssey, click the banner below to visit our coverage hub.