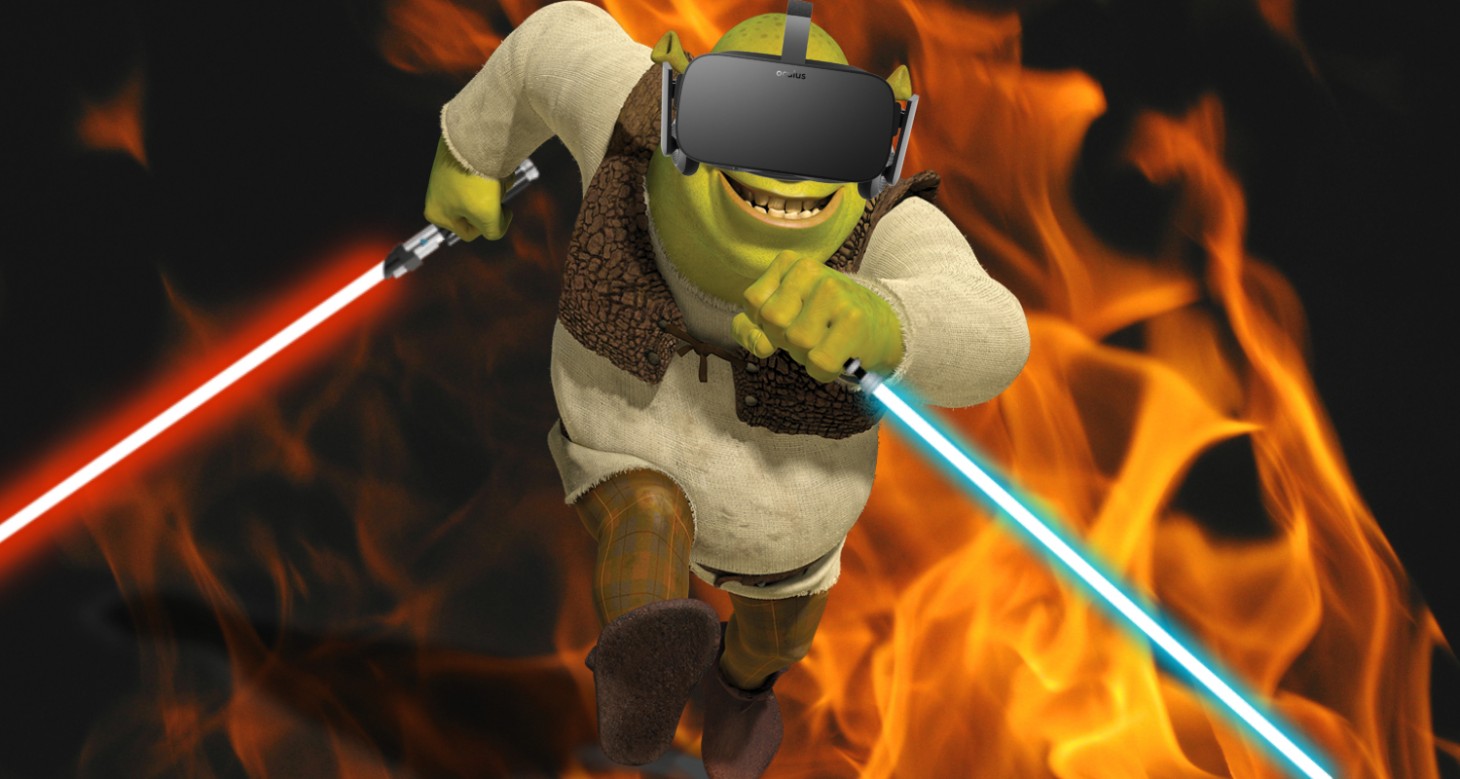 I Played All Of Shrek In Beat Saber, And It Nearly Killed Me

Beat Saber, the Early Access VR rhythm game about slicing through colored blocks with lightsabers, has quickly grown a huge modding community that is making custom tracks for the game. Most of these tracks are exactly what you would expect: playable versions of popular songs that the dev has not yet licensed. Next to those songs, however, is a collection of bizarre playable audio files, like the GameCube startup noise or Obi-Wan Kenobi yelling “I have the high ground.” But arguably the crowning achievement of this weird subset of tracks is this week’s new release: Shrek. And when I say “Shrek,” I don’t mean the film’s soundtrack, I mean Shrek, the full movie. Dialogue, music, moments of silence, that scene where Shrek makes a joke about Lord Farquaad compensating for something – someone tracked the full film’s audio into one 83-minute long, 10,000+ note playable track.

And I played it. 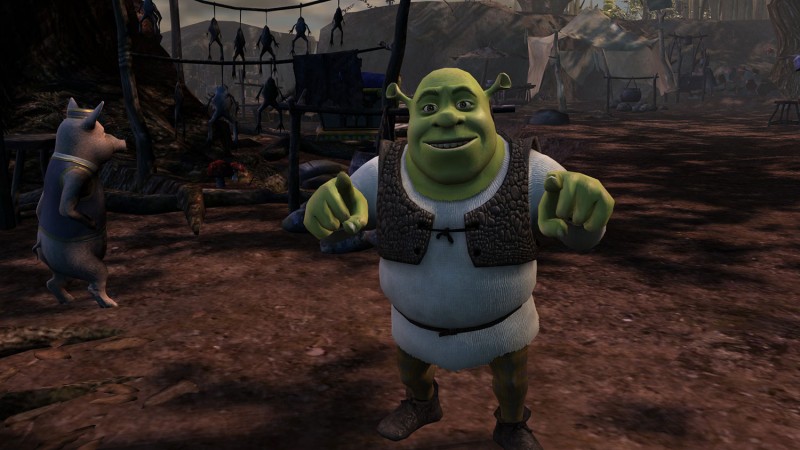 I’ve put dozens of hours into Beat Saber over the past several months, but this undertaking was something different. Usually, I’d queue up several of my favorite songs – Mr. Blue Sky by ELO, Stronger by Daft Punk – and play them individually, trying to better my personal high score. But when I was an hour into Shrek with no end in sight, I couldn’t help but think of Jeff Goldblum’s famous Jurassic Park quote: “Your scientists were so preoccupied with whether or not they could, they didn’t stop to think if they should.”

Within weeks of Beat Saber’s release, fans of the game set up websites and mods to allow anyone to easily download custom tracks from the web. They’re easy to download and play, but actually making songs takes a huge amount of effort. Elliott Tate, a mod of bsaber.com (the source of most custom songs) estimates the good ones take about 10-20 hours for a 5-minute song. There’s no automation – every note must be placed by hand. For this reason, it came as an absolute shock to the community when mapper “KingPeuche,” announced he had completed work on Shrek’s entire 83-minute runtime.

The movie has an iconic soundtrack. From “Bad Reputation” to “Hallelujah,” most of the story’s climactic moments are accompanied by excellent songs. Would the band Smash Mouth be where they are today if not for their anthem “All Star” featured in Shrek’s opening credits? 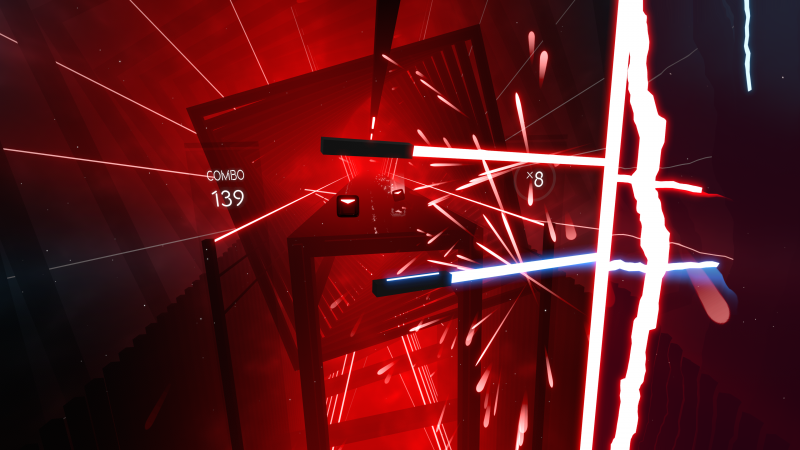 But this mapping goes far beyond the soundtrack. Every piece of dialogue, sound effect, and even physical gestures, is mapped into the VR world. When Robin Hood beckons for his Merry Men, a series of notes led my arm to do the same. Because the game also includes virtual walls that have to be avoided, Lord Farquad’s proposal, in which he jerks Fiona down to his (diminutive) level, basically flattened me against the floor. The most challenging parts of the track was Donkey’s dialogue; anytime the motormouthed Eddie Murphy started talking, the notes in my path increased to a blistering pace.

Of course, the first question I had about this project is simple: Why? Why would anyone subject themselves to this task? KingPeuche sees himself as a trailblazer of sorts.

“Not only is it for Shrek, it’s for the history books,” he explained in an interview with bsaber.com. “I’ve yet to see any rhythm game have an entire film be mapped.”

However, this landmark moment in custom tracks didn’t come easily. KingPeuche estimates it took him more than 120 hours to finish the movie, a commitment he balanced with both school and a girlfriend. Despite the commitment, he doesn’t feel burnt out on Beat Saber yet.

“This was my pleasure, it was a hobby,” he said in the same interview. “I thought this would tire me out, but it in fact did the contrary.” 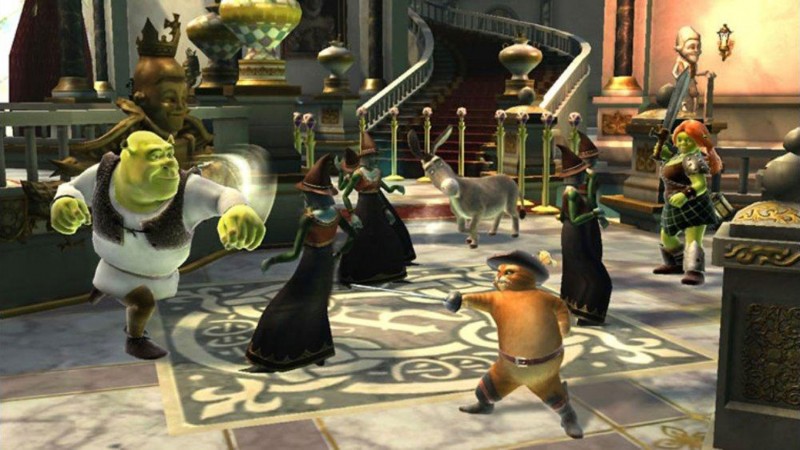 His results are inarguably impressive. Little moments, like Shrek wringing his hands while explaining ogres and onions, contrast effectively with the bombast of the movie’s setpiece moments. Escaping from the dragon is a genuinely thrilling sequence, with a steadily increasing tempo and red walls of “flame” that I had to jump to avoid.

It even made me appreciate the movie’s script more. Shrek is funny. Not just as an endless source of memes, but as both as a self-aware take on the tropes of fantasy and simply as a sincere fairy tale. Donkey has routinely hilarious monologues that occasionally got lost in the visual flair of the movie; here, they’re placed front and center.

Perhaps most importantly though, the track is absolutely exhausting. Beat Saber requires constant movement. Every note requires a specific swing of the arm, and Shrek has 11,675 notes. For my hour and a half of effort, I was rewarded a “B” rank, not putting me anywhere near the top ten. Moreover, VR simply isn’t comfortable for such long periods. My coworkers dragged me out to lunch after finishing the “song” and I winced while adjusting to images that weren’t projected on a screen an inch from my eyeballs.

Playing Beat Saber with its best songs is some of the most fun I’ve ever had with a game. Finishing all 83 minutes of Shrek was an absolute gauntlet of one-liners and 2001’s best needle drops. It’s an experience I enjoyed, but I don’t think I will ever do it again. That is, until KingPeuche’s next project is released; he’s already working on Shrek 2.