Windjammers Coming To Switch This Year

Windjammers, the competitive disc-tossing game that first released on in arcades and on the Neo Geo, is coming to the Nintendo Switch later this year.

The game was originally developed by Data East and published by SNK in 1994. It reached semi-cult classic status over the years and was popularized by a Wii Virtual Console release and online streaming, leading to Sony working with DotEmu to port the game to PlayStation 4 and Vita with online play. It looks like DotEmu is porting that version to the Switch.

Windjammers was released on PS4 and Vita last August. The Switch version is thus far undated but DotEmu plans to launch the game before the end of 2018. 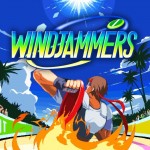