Arc System Works, the developer behind games like Guilty Gear, BlazBlue, and Dragon Ball FighterZ, has announced a worldwide tournament for its own games. Called the ArcRevo World Tour, the company is planning a series of $100,000 tournaments in the U.S., Europe, and Japan.

The idea is similar to Capcom's Pro Tour, with ArcSys running their own games like Guilty Gear Xrd Rev 2 and BlazBlue Cross Tag Battle. It serves as good promotion for the title and it encourages community engagement.

ArcSys also announced that Daisuke Ishiwatari, the artist and director behind the Guilty Gear series, is currently in Japan working on new Guilty Gear content. They did not clarify what this would be, whether it's a new revision to Xrd, DLC, or something else entirely.

Finally, they teased that a fifth franchise is joining BlazBlue Cross Tag Battle, which currently includes BlazBlue, RWBY, Under Night Inbirth, and Persona 4 Arena. Based on data mining, it is thought that the fifth franchise will be Marvelous' Senran Kagura series, a fanservice-heavy action series that began on the 3DS. 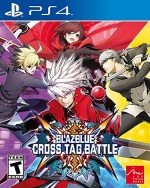