The crossover of Final Fantasy XIV and Monster Hunter World was announced at E3 this year with surprisingly little fanfare for merging the worlds of two huge games. The lack of celebration around the meeting of the two series may have convinced some that their crossover content would be a light or low-effort, but it turns out that the inclusion of Final Fantasy’s Behemoth into Monster Hunter World is a lot more intricate than one would think.

Rather than simply giving you a mission to fight the hulking purple monster, getting to the Behemoth requires following a questline first. When you first land in Astera with the update applied, the serious handler from various points in the game is standing near the resource center. She says that the A-Lister, the redhaired and headstrong hunter from the game’s story, has discovered a thing in Wildspire Wastes that is not quite an animal. Seems worth checking out, my hunter goes to give it a look. 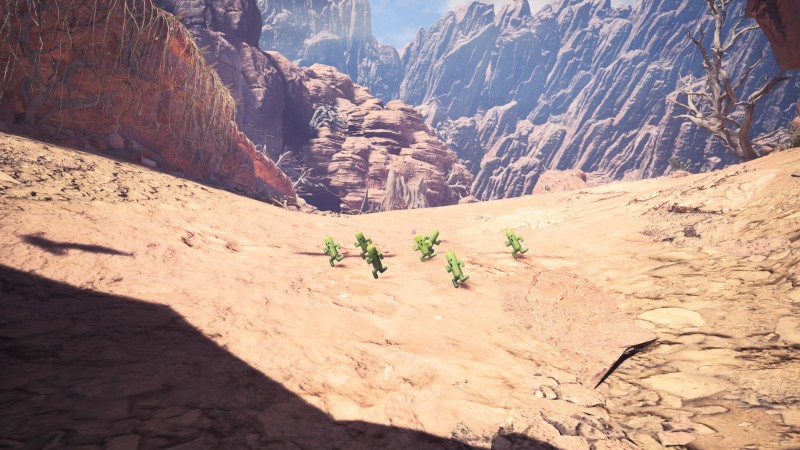 It turns out to be a cactuar. A lot of cactuars, in fact. The mission has you chase after the little monsters, but most importantly, you can sneak up on one with a net and get it as a pet, which is the very first thing I did.

After some chasing hijinks, I discovered that the cactuars are pouring out of a crystal with a moogle panicking around it. The crystal is picked up by a Kulu Ya-Ku, which absorbs the magic power to get bigger and run off with the Final Fantasy symbol. My hunter volunteered to help get the crystal back and the moogle hid for safety. After all, it’s just a Kulu Ya-Ku, that’s one of the most basic of Monster Hunter World’s monsters.

The crystal-powered bird brain is surprisingly tough. Not only does he get progressively bigger throughout the battle, he never drops the damn thing. That means he has a weapon the entire fight, as well as complete shielding from the front. Even with fully-upgraded high rank armor, he could take me down in two hits, usually by hip-checking me and then jumping from a long distance away. The entire fight is set to Final Fantasy’s Chocobo music, which is one of two really cool uses of the series’ music in the hunt.

Upon defeating the Kulu Ya-Ku, the moogle explains that he ended up here from Eorzea, Final Fantasy XIV’s native land. In a story scene, the Seer from the Elder Crossing in Monster Hunter World’s campaign is brought in to consult as your palico translates moogle talk to Monster Hunter language.

It turns out that a Behemoth followed whatever brought the moogle to the New World, prompting a lot of shocks and gasp from the gathered audience. The Seer reasons that the Behemoth, attracted to crystals and life stream energy, would almost certainly have gone to the Elder Recess. Obviously the hunters can’t leave a giant otherworldly monster to wreck up the New World, so a mission is set to repel the Behemoth.

The mission begins with you meeting the Behemoth, who might have my favorite monster intro in the entire game.

You’re given eight tries at tackling the Behemoth in this first round, which I presume is Capcom taking mercy on players who didn’t realize what they were getting into. Behemoth is not to be fought alone and a few minutes attempting to do so will convince you of that. The damage numbers popping off him resemble Final Fantasy XIV’s and constant messages pop up on the side telling you what spell the monster is using, much like the MMORPG.

When I say constant, I mean constant. Behemoth does not let up, ever. Capcom boasted that the hulking brute is the hardest monster in the game to solo and that is absolutely true. The Final Fantasy monster casts elemental magic that chases you down, as well as a high frequency of Meteor and Comet spells. Trying to fight Behemoth without a party means getting one or two hits in every minute if you don’t want to take a lightning bolt to the face. In fact, the game outright tells you that you should bring a party to fight it. 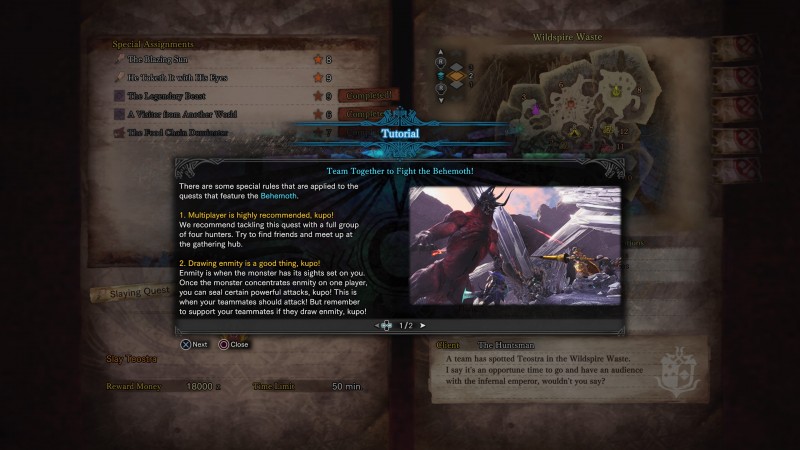 To defeat Behemoth, it’s advised that one player draws aggro, or enmity, and forcing the monster to focus solely on them. A red line appears from the Behemoth’s head to the unenviable hunter, showing that the brute’s attention is drawn and everyone should use this time to wail on it while they have the chance. After enough damage, Behemoth casts Ecliptic Meteor, an instant-faint attack that turns the sky red and is nearly impossible to avoid.

Behemoth retires from the fight after that move, making the hunt semi-successful. Another meeting happens back in Astera, where the moogle teaches you the Final Fantasy XIV Jump gesture, which coincidentally is one of the few ways to avoid Ecliptic Meteor. You can now take on Behemoth in a real hunt for the first time.

The game warns you several times to not attempt this solo, which I imagine is technically possible, but far from a good idea. In my first attempt at fighting Behemoth, I sent out a SOS flare and immediately got a full party, one of whom put the monster to sleep and dropped a bomb on its head. The bomb effects also had Final Fantasy XIV UI elements, which is a neat touch. 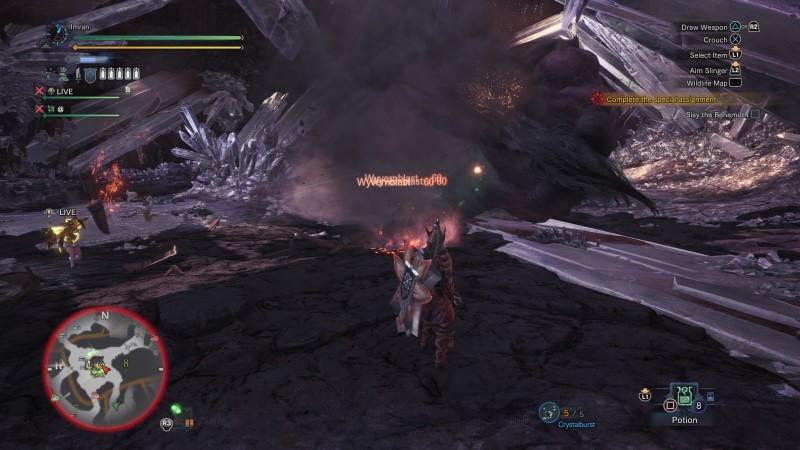 One of our party members dropped out, meaning an already tough fight became near-impossible. So we tried our best and lost.

I’m going to get together some friends and try to take him on again with something resembling coordination. But if you’re curious whether you should fire up Monster Hunter World to take on the Final Fantasy content, it is a lot bigger, cooler, and way tougher than I thought it would be. Definitely give it a shot, but be prepared that it’s not a walk in the park.