Donut County Opens Up On August 28 For PS4, PC, And IOS

Donut County, the puzzle game from developer Ben Esposito, has gotten a release date. The hole-based game will release on PlayStation 4, PC, and iOS on August 28.

Donut County gives you the power of holes to gradually expand and suck up an entire town. The game is very Katamari Damacy-like by having players start with smaller objects and get bigger to end up taking the entire town to the cavernous depths below.

We played the game at Sony's PSX show last year and really liked it. You can check out a release date trailer for the game below.

You can take your own look down the abyss of Donut County in just a few short weeks. 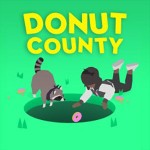