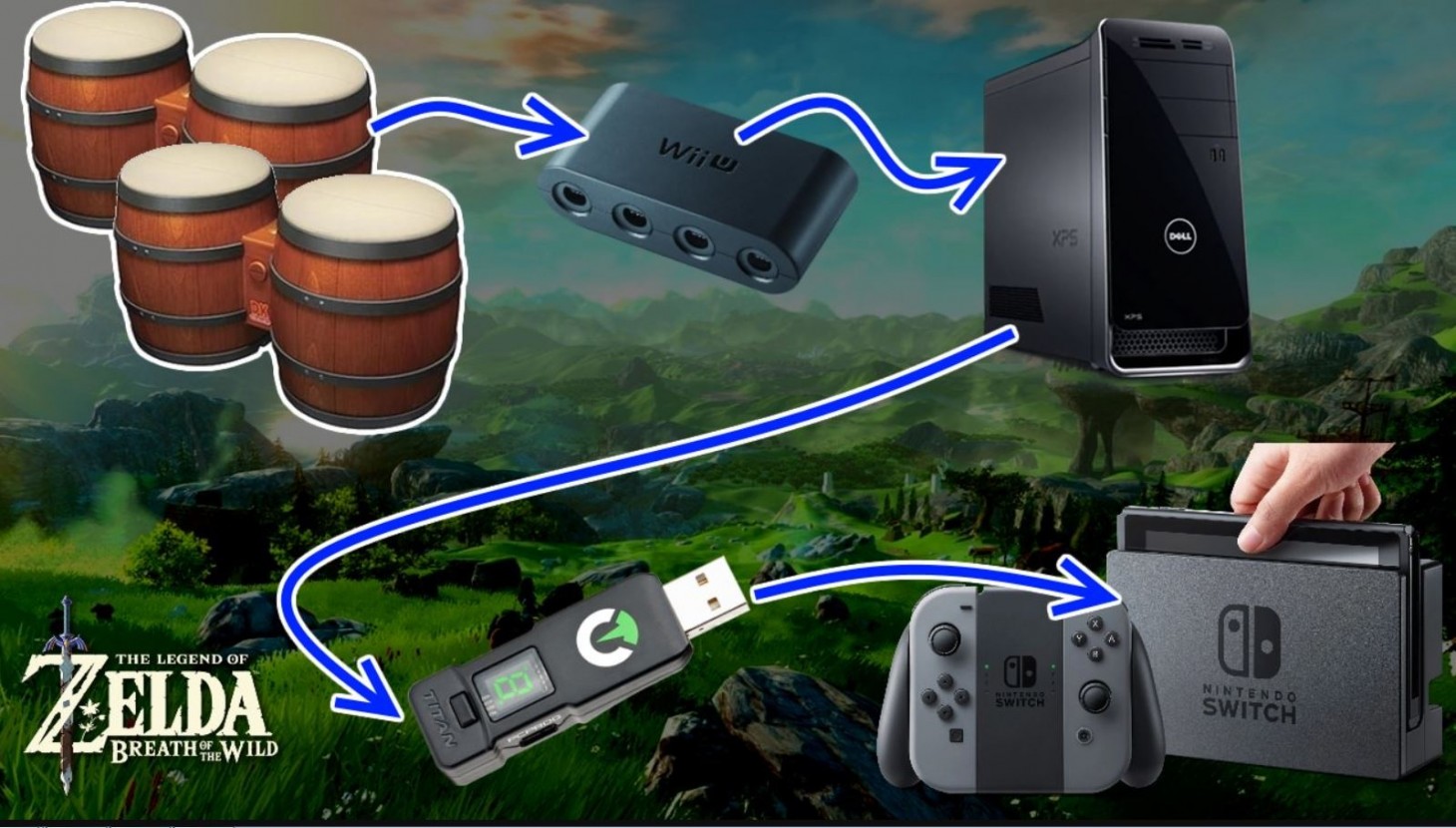 You’re Playing It Wrong: The Wackiest Control Schemes On The Planet

Louis Hamilton laughed and gave his webcam a big, cheesy thumbs-up, feeling high off the thrill of victory. His success wasn’t unique; like many streamers before him, he had just beaten the challenging Lothric and Lorian bosses in Dark Souls III. But strangely enough, he wasn’t holding a PlayStation or Xbox controller. Instead, Hamilton’s thumbs-up was swaddled in a boxing glove with a Wii remote strapped to the side. 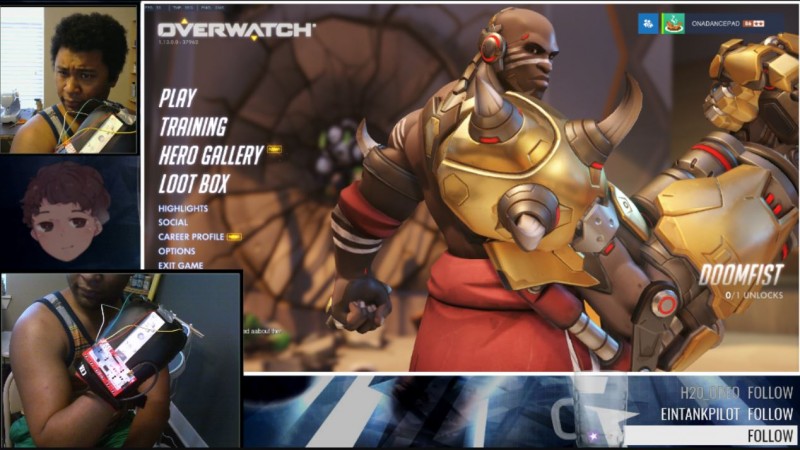 Hamilton's boxing glove, rigged up to control Doomfist in Overwatch

The first mainstream success in this type of challenge came from Canadian streamer Bearzly. In August 2014, he started playing Dark Souls with a Guitar Hero controller. Several instrument peripherals later, he was awarded a Guinness World Record: most alternative control methods used to complete Dark Souls. The weird-controller subculture has only grown since then.

Hamilton didn’t know about Bearzly when he started, though.

“Me and my buddies were just playing games, just every night after school,” he says. “And one of the days, my buddy brought his dance pad…and we're like, what if we play Street Fighter with this? And somehow it worked.”

That discovery led him down a path of increasingly ridiculous peripherals. Through a mess of converters and custom scripts, he’s been able to hook up almost any controller to any system. He’s played Dark Souls with Kinect, Bloodborne with DK Bongos, and The Legend of Zelda: Ocarina of Time with a DJ Hero turntable.

“I went to school for computer science, so I had just the programming knowledge in general,” Hamilton says. “I just never thought I would do it for stuff like this.”

Like Hamilton, streamer Dylan Beck (who goes by Rudeism online), refuses to play games as intended. His work often begs the question: What object can’t be a controller? In a recent Far Cry 5 playthrough, he attached buttons and analog sticks directly to a deer skull included in the special edition of the game. Last year, he played Overwatch with a gyroscope-d baguette in a tribute to the French character Widowmaker. Also like Hamilton, he seemed to just stumble into the trend.

“I had a reputation in high school for being ‘that guy’ at Guitar Hero,” Beck says, “and a friend of mine joked that I should try and play Rocket League with a Guitar Hero controller. So we tried it out and it ended up working really well. [It] got some attention on Reddit as well.”

Neither Hamilton nor Beck deny that a big part of the appeal of this work is the attention they’ve received. In the competitive world of streaming, everyone needs a hook; playing Rocket League with flight sticks is as good as any.

“I mean, at the beginning it was 100 percent attention,” Beck says. “I'm not going to lie about that. … [But] on top of that now, I'm actually discovering how much I really enjoy building this stuff.”

The process of getting these controllers working is always charmingly haphazard. For electronics, the signal typically needs to be directed through a number of different programs to essentially fool the console into thinking it’s receiving inputs from the correct device. But that’s elementary compared to some of the setups Beck and Hamilton run with.

A programming toy called “Makey Makey” lets anyone run an electrical current through everyday items and then define changes in the current in terms of programmable keystrokes. In more grounded terms, this looks like attaching an alligator clip to a conductive item (like a banana), and then turning user inputs (poking the bananas) into button presses. The level of complexity is only limited by your quantity of fruit.

“It’s usually 12 bananas” laughs Hamilton. “It's really funny to go to the cash register at a store with just like, 12 bananas.”

Of course, not all food makes for equally good controllers.

“I remember trying to play Portal with a cake.” Beck says. “I did it for my birthday. I rigged up a whole bunch of little cherries on top of the cake as buttons. … Imagine all of the buttons for a game just arranged in a circle, just a circle in front of you. And they're all incredibly – yuck. It was gross. Like I was giving myself hand cramps, the cake was falling apart.”

Despite the potential mess, Hamilton and Beck insist that getting started in the world of unconventional controllers is fairly easy.  And rather than discouraging others from stealing their spotlight, both players seem to delight in getting people to try out their setups. Hamilton is working on tutorials to teach others how to use his jerry-rigged controllers, and Beck is in the process of making all his code publicly accessible.

The larger gaming community is accustomed to self-imposed challenges – slappers only! – and the absurdity of playing “wrong” is accentuated in a crowd. During PAX Australia, Beck ran an event where he provided a half-dozen different input methods for Overwatch players to duke it out.

“I encourage other people to at least try it out,” says Hamilton. “And it's not as hard as you think.”

Hamilton and Beck, despite playing with typical controllers their entire life, admit to sometimes performing better with their cobbled-together peripherals.

Beck even says he dies less with a frying pan than a standard controller for Dark Souls.

“It’s really weird,” he says. “By all means, it's not better than the standard controller, but I've gotten used to using it so much. It just feels more comfortable.” 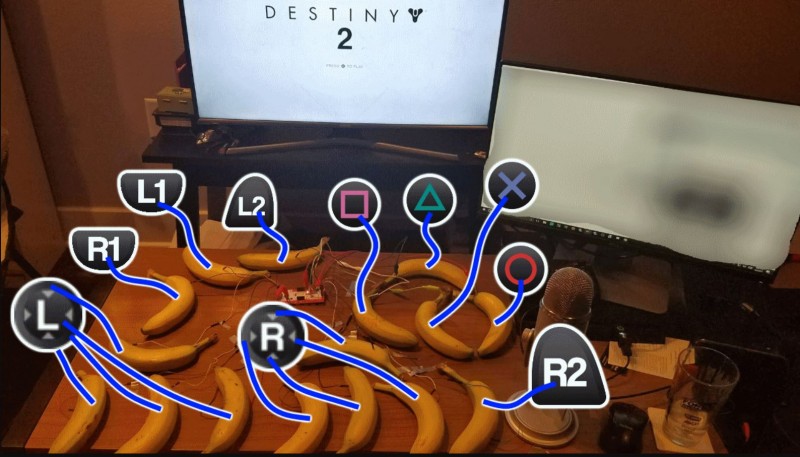 "You don't realize how easy it is just to press a button," Hamilton says, referencing the challenge of playing with bananas

In the future, both streamers want to create input methods that could add verisimilitude to the gameplaying experience. Beck spoke about wanting to put together a cosplay-quality staff to match Mercy’s from Overwatch, complete with a spinning top and different triggers to heal or boost. Hamilton is currently building a life-sized Keyblade from Kingdom Hearts, which will sense motion and match real-life movements to in-game attacks.

“I feel like that's the dream of what I want to do, as we move closer to AR and VR,” Hamilton says. “It'd be really fun seeing if we can make peripherals just like [the items] in the game, and almost have a 1:1 experience with the game itself.”

The controllers aren’t simply for goofs, either. For gamers who don’t have a full range of motion, radically different ways of playing a game could be the bridge into previously inaccessible genres. Hamilton even has a Breath of the Wild setup running entirely on voice commands, making it possible to play without any physical inputs.

“At the moment, I've been feeling this really massive urge to build stuff that's ... not only a bit silly, but something that someone else might want to use,” Beck says. “I’ve seen what people at AbleGamers do. … I’d love to build something like that. I think that’d be fantastic.” 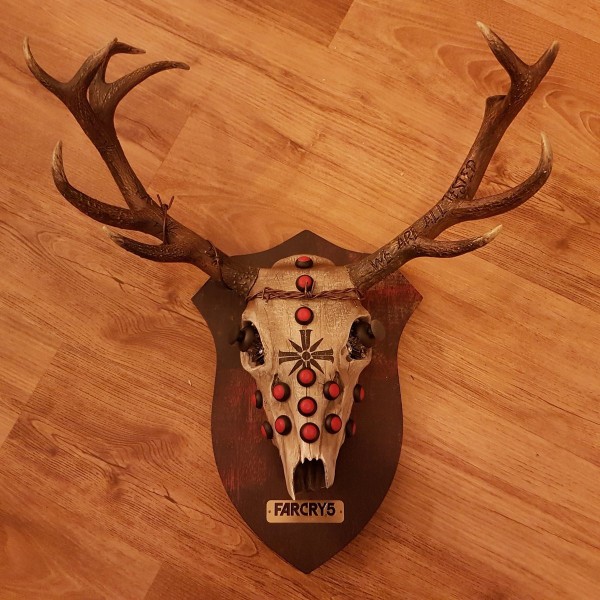 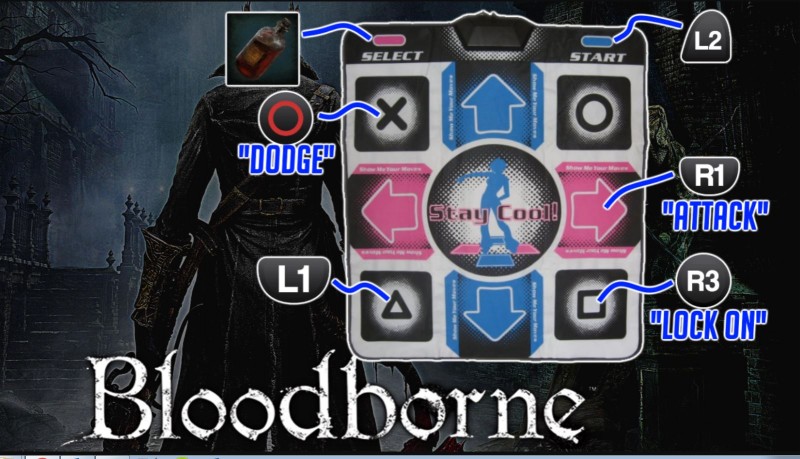 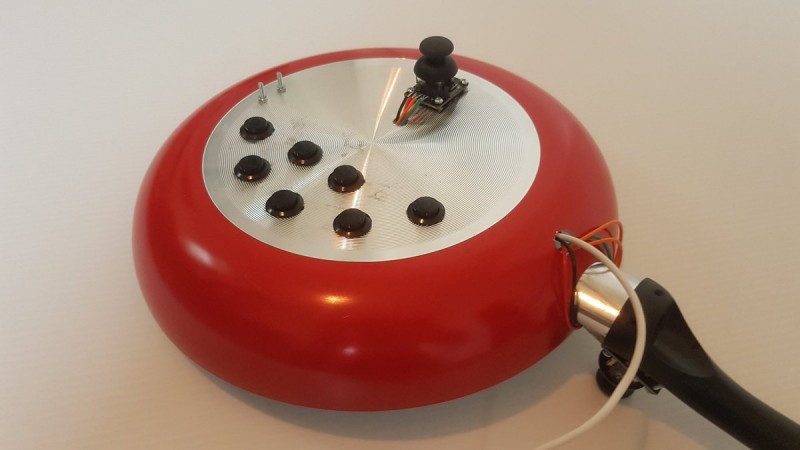 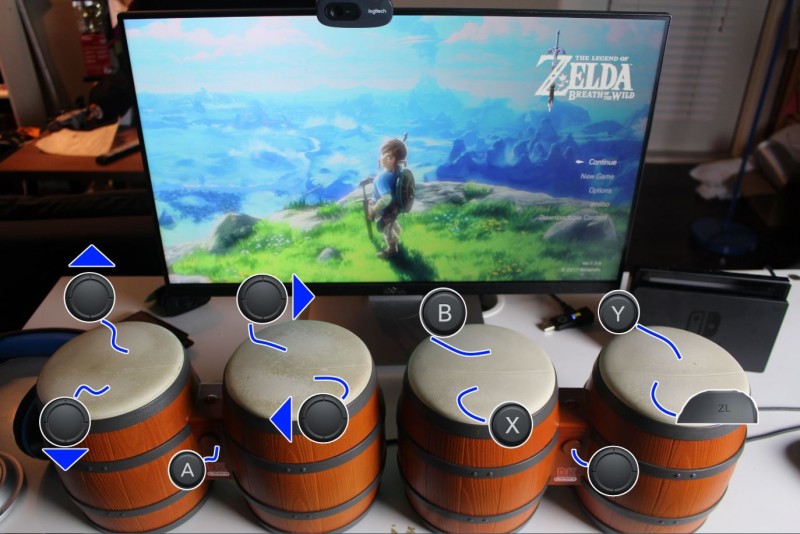 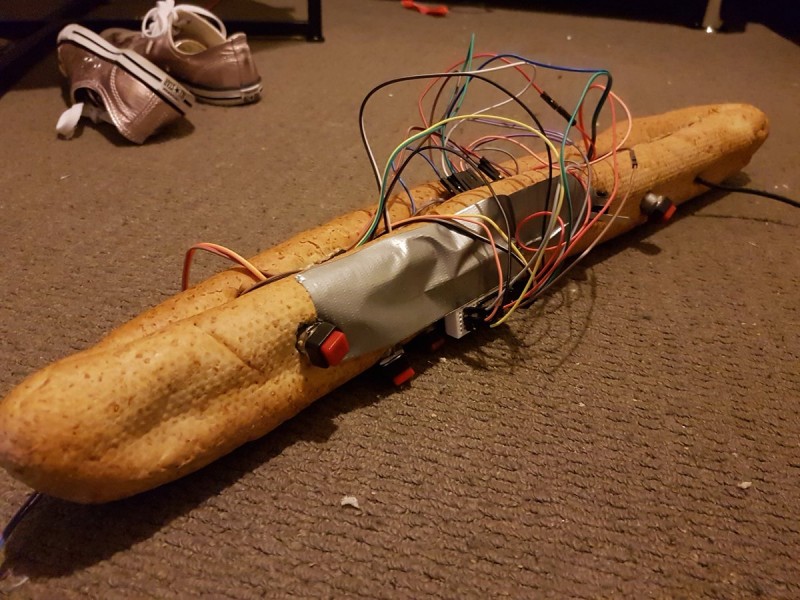 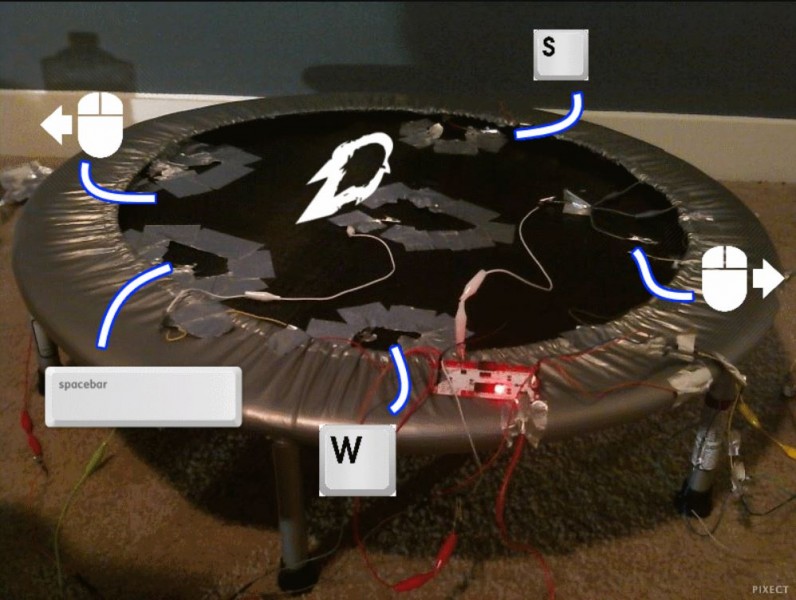 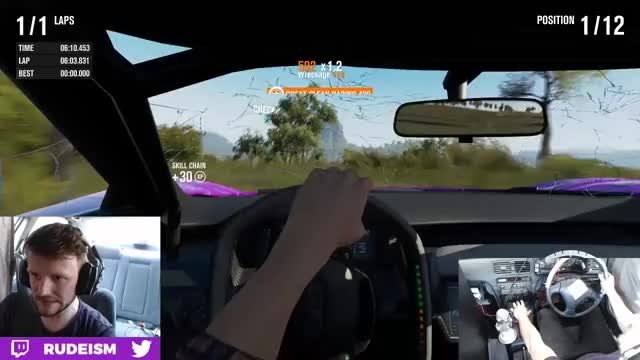 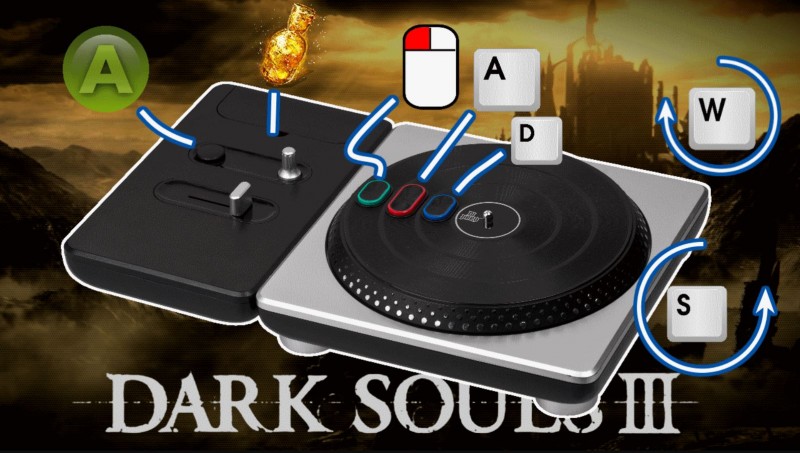