Announced today and out in a few months, Nickelodeon and GameMill Entertainment have announced a Nickelodeon kart racer titled Nickelodeon Kart Racers for the PlayStation 4, Xbox One, and Switch.

The game pits characters from Nickelodeon history against each other on tracks from a lot of the same series, like Tommy's house in Rugrats, Bikini Bottom, the sewers of New York City, and Arnold's school. Confirmed characters include Tommy Pickles, Reptar, and Angelica from Rugrats; Helga and Arnold from Hey Arnold; Patrick and Sandy from SpongBob SquarePants; and all four Teenage Mutant Ninja Turtles from the new cartoon. 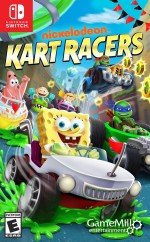