THQ Nordic confirmed today that Darksiders III, the newest game in the Darksiders series from last generation, will launch this year on November 27.

Darksiders III was announced last year after an Amazon listing leaked its existence. THQ Nordic announced that the game was being developed by Gunfire Games, a studio made up primarily of developers from former Darksider development studio Vigil Games. THQ Nordic acquired the Darksiders license a bit after THQ closed down and started talking about a possible new Darksiders in 2013.

In addition to the standard edition, Darksiders III is also being sold as a $150 Collector's Edition, which you can see below, and contains a soundtrack and an artbook.

There is also a $400 Apocalypse Edition which, among other things, contains statues for Darksiders' War, Darksiders II's Death, and Darksiders III's Fury.

Darksiders III is releasing on Xbox One, PlayStation 4, and PC on November 27. 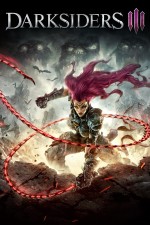