Tales of Madness: The Lovecraftian Games On The Horizon

I don't need to give H.P. Lovecraft much of an introduction. He's the man who added tentacles to horror, and gave creatures names no one can spell. His work, which dates back to the early 1900s has been an inspiration point for many game developers today.

Hit games like Dead Space and Bloodborne toy with Lovecraftian themes and imagery. Telltale signs of his work are characters going insane and seeing ghastly beings which can hardly be described. I've identified seven forthcoming titles that embrace these elements – some outright showing their Lovecraft influence in the title, others with it hidden in the story and world themes.

If you are a fan of stories that have characters teetering on the brink of insanity, here are seven games you should keep your eye on;

Based on the popular pen-and-paper RPG by Chaosium, Call of Cthulhu is a first-person RPG with a strong focus on investigations and player choice. Set in 1924, the player is a private investigator named Edward Pierce, who has been sent to Darkwater Island to look into the death of the entire Hawking family. Police reports don't add up, and the locals don't want to aid Pierce in his search for answers. As he pieces the murder together, Pierce travels to Darkwater's asylum, the Hawkins' mansion, and into the bowels of a long-dead whaling industry.

The island fights back at Pierce, trying to stop him however it can. He starts to see ghastly things, cults rise up on the coast, and creatures beyond description emerge from the woodwork. He's losing his mind, and must race against time to solve the murder and get off of the island. He isn't a fighter, so any creatures or hostile locals must be dealt with without throwing a punch or shooting a gun. He needs to use his wits, which are slipping away. Do you trust a sailor's words, or sneak up behind him to steal his keys?

No release date has been given for Call of Cthulhu other than 2018. Cyanide is the developer behind the Styx series of games, and is also working on a video game adaptation of Werewolf the Apocalypse. 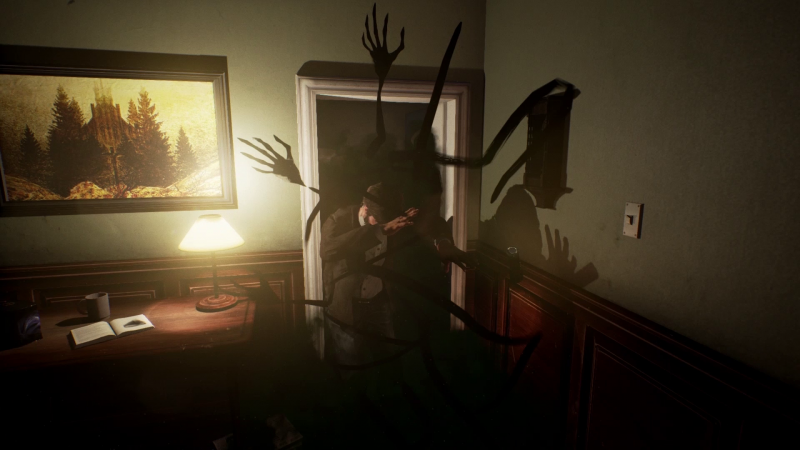 Song of the Horror features 16 playable characters, yet focuses on the story of Daniel Noyer, who is trying to contact one of his agency's top clients. Noyer is exploring his client's home, which he quickly learns is possessed by something called The Presence. This entity can warp reality and make Noyer see things that aren't real. As you control the other characters, caution must be applied. If they die, they won't come back. Protocol believes permadeath will heighten the tension. Most of the footage we've seen features darkly lit rooms, with extensive flashlight usage. Silent Hill and Fatal Frame are clear inspirations for this project, which sadly doesn't have a release date yet.

Developer Frogwares, which is best known for its long-running Sherlock Holmes series of games, has been working on The Sinking City for over two years. Set in the fictional city of Oakmont Massachusetts, New England, The Sinking City is an open-world experience that blends investigations with combat. Oakmont is suffering from flooding, and it doesn't appear the rains are going to stop anytime soon. As the water levels rise, so do the number of strange occurrences in the town. People are losing their minds, and creatures are emerging from the sea.

As a private investigator named Mr. Reed, you are tasked to figure out what is going on in the city, and also keep the horrors at bay. Gun play is a big part of this experience, and sharp shooting is required to take down the little creatures that scurry down city streets and the large ones that loom above its buildings. Puzzle solving also comes in many forms, some harking back to Frogwares' expertise with item management in Sherlock Holmes, and others being environmental in design. If a door is locked, that doesn't mean you need to find a key. Climbing onto a car, and then a balcony will grant you access to an open window. Since much of the city is flooded, Reed is often forced to use a boat to explore areas of it.

Like all Lovecraft games, madness plays a large role in The Sinking City, but Reed isn't just going insane; he can tap into this power to see into the past to give him an idea of what may have happened. Frogwares doesn't want the player to ever see a "game over" screen and instead wants them to feel the impact of failing. Reed will have to live with his consequences, and failing a mission may close it off. This is something the team did well in the Sherlock Holmes games. You could finish a mission without gathering all of the clues, but may have sent the wrong person to prison. You had to own up to that mistake as you moved forward deeper into the game.

Not all Lovecraft-inspired stories need to be serious. Developer Stuck in Attic describes its upcoming game as a "comedy cosmic horror point-and-click adventure with a Transylvanian twist." With heavy inspiration drawn from LucasArts classic adventure games, Gibbous gives players control of three playable character, the first shares a common theme with every other game listed in this editorial: He's an investigator!

One of the other characters is a librarian who has to deal with his cat transforming into a talking monstrosity. This odd relationship unfolds through traditional frame-by-frame animation set atop painted 2D backdrops. The goal of the game is to stop the evil pouring out of the Necronomicon.

The red sands of Mars are not safe from H.P. Lovecraft's touch. The Moons of Madness is a story-driven first-person experience that begins with the question: Are we alone in the universe? Playing as Shane Newehart, that question is not easily answered. Something strange is happening in the caves of Mars, but is it just in your mind, or have you uncovered the remains of an alien society?

Moons of Madness toys with the concept of cosmicism as it dives deep into Lovecraft's mythology. As the trailer shows, Newehart's life will also come into focus under the planets surface as he tries to make sense of what he's seeing. 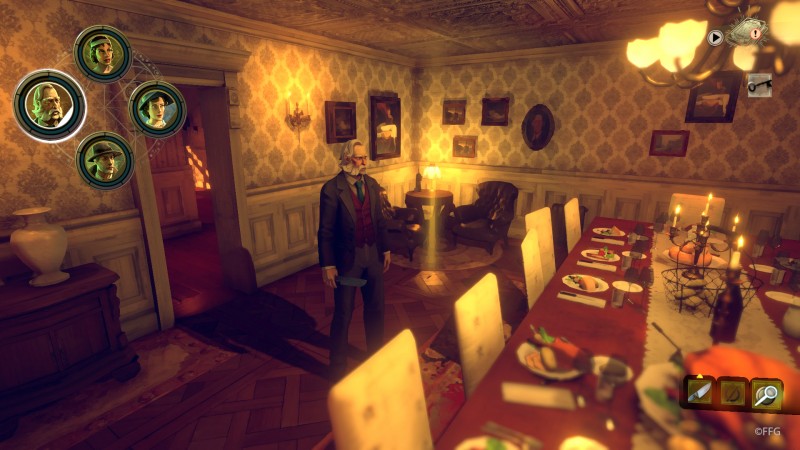 If you play board games, you've likely assembled a crew to take on Fantasy Flight's Mansions of Madness. This interpretation of the Arkham Horror Files universe is heading to PC in 2019, courtesy of developer Luckyhammers. In this slightly different take on the game, you'll play as Jenny Barnes, Harvey Walters, and Roland Banks, and are tasked to work against the Keeper who is unleashing horror within a mansion.

Described as a "digital adventure game" by Fantasy Flight, Mansions of Madness: Mother's Embrace you'll switch characters on the fly to overcome traps, solve puzzles, and take down creatures of the eldritch variety. No footage of the game has been shown yet, but images show off the detail of the house and the meter for the party members in your investigation.

In an interview with us last year, Ángel Luis Sucasas, a narrative director at Alpixel Games, told us A Place for the Unwilling is a narrative experience he hopes will "disconcert players, make them laugh, horrify them and move them; never knowing which emotion will come up once they draw the next card from the deck."

A Place for the Unwilling is set in a dying world, and the player gets to experience its 21 last days. The goal is to build relationships by communicating and trading with the people of what is just called "the city." Every conversation and action carry weight, and will change the path ahead. Each day lasts about 20 real-time minutes, and you'll have to figure out how to spend that time. Staying out far later than you should will affect the story.

The influences for the game are H.P. Lovecraft, Charles Addams, Edward Gorey, and Grimm's Fairy Tales. 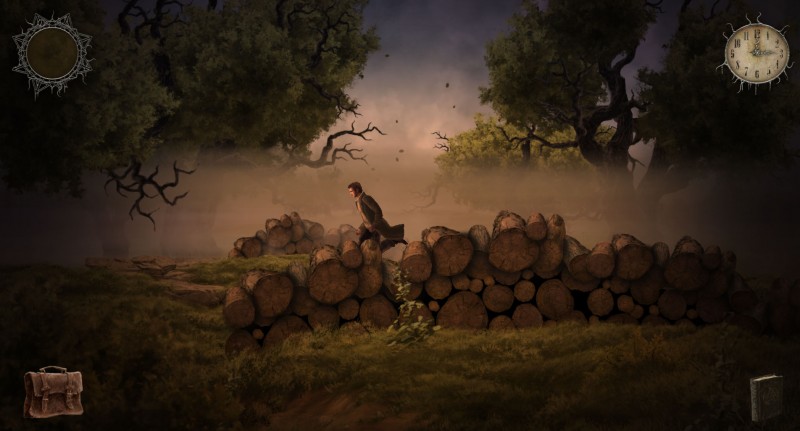 Lovecraft Tales: The Whisperer in the Darkness

In 2014, developer CVLT Games attempted fundraising for Lovecraft Tales through Indiegogo. With only $604 of the $80,000 goal raised, it looked like this Lovecraftian experience wouldn’t see the light of day. Even though the project appeared to be stuck in mud, CVLT seemed to have a good sense of humor about it, delivering this message to backers:

Fortunately for you, humans, we were not able to take control over your minds this time, so our Indiegogo campaign failed.

But beware… We received valuable feedback from some of you, so it will help us grow stronger. We will rise eventually, and we won’t forget about those who supported us. We may even let them live in some disgusting shrimp bodies. We’ll see.

But for now, we are going back to Yuggoth, where we will be preparing for invasion, humans. You may hear some unsettling noises from there sometimes. We hope that they will destroy your peace of mind.

Following this message, a demo appeared in Steam Greenlight in 2016. Now, after two years, it's listed on Steam as a fourth quarter 2018 release with the potential subhead of The Whisper in the Darkness. Lovecraft Tales will be published by Fat Dog Games, but little is known about the current state of the project. Fat Dog’s website lists it as an upcoming game set in the dark universe of H.P. Lovecraft that will “mix classic adventure and point ’n’ click survival gameplay.” It will also feature something described as a “half open world” with enemies reacting differently during the day and night. The story is inspired by Lovecraft’s The Whisperer in Darkness, and is set within a swampy province in Vermont. This area is controlled by cultists that will pose a threat, just as much as the hero’s mind, which is quickly unraveling.