Blade Strangers, a 2D fighting game made by Studio Saizensen of Code of Princess fame, is releasing on August 28 on Switch, PS4, and PC.

The sprite-based fighter beings together the characters under Studio Saizensen's banner as well as characters from Cavestory, Binding of Isaac, Mighty Gunvolt, and Shovel Knight. You can check out the release date trailer below.

The game includes a story mode for each character, as well as online battles, tutorials, and a surprising number of features for an indie fighting game.

I am surprised at how good the game looks in motion. I don't know how good Studio Saizensen is at making fighting games, but I am at least interested.
.
On
On
Off 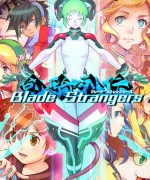