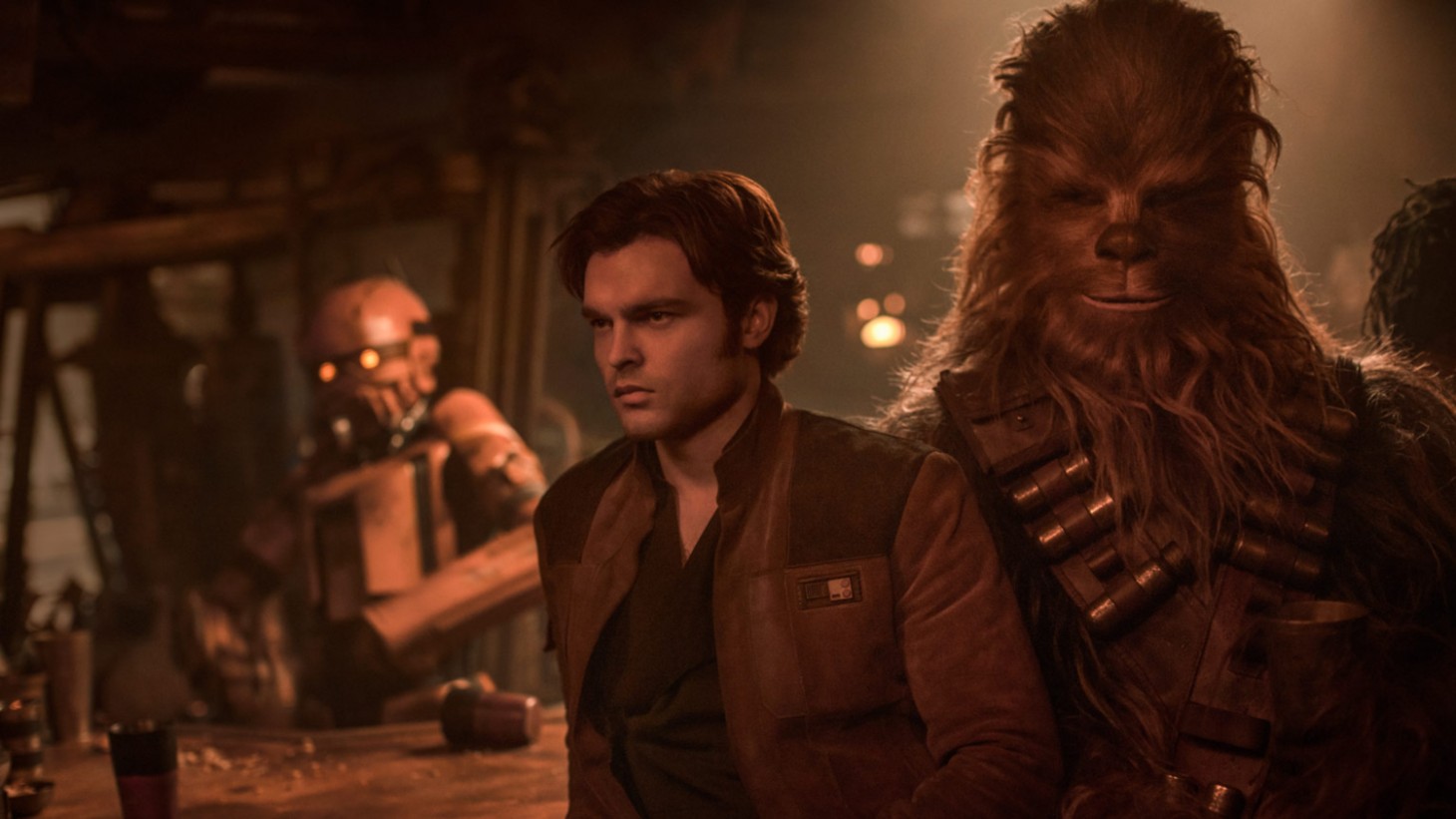 7 Video Games That Will Make You Feel Like Han Solo

Star Wars: Battlefront II is celebrating Solo: A Star Wars Story with the release of new content for its Han Solo season, so we decided to celebrate Solo, too.

Solo: A Star Wars Story is an entertaining adventure that brings viewers to Star Wars locales only briefly mentioned in the previous films. Han's adventure takes a different approach to the Star Wars universe, focusing on building out the canon with criminal organizations, pirates, smugglers, and thugs rather than depicting the struggles between Jedi and Sith, or the Empire and the Rebellion.

If you enjoyed Solo’s look into the Star Wars underworld, check out these games that’ll make you feel like a scruffy-looking nerf herder (in a good way). 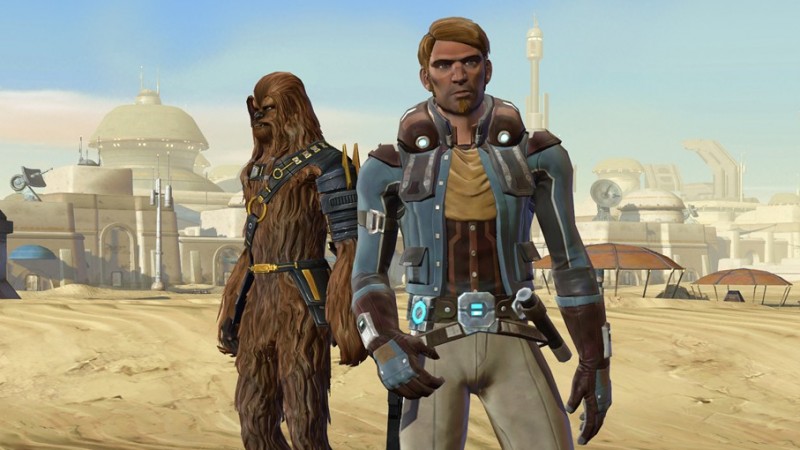 The Old Republic's smuggler class is basically just a wannabe Han Solo, but who isn't?

Playing as The Old Republic’s smuggler class takes you to iconic Star Wars planets like Tatooine and Alderaan, where you fight bounty hunters, mercenaries, and pirates as you search for a legendary treasure. In the opening hours of the smuggler’s story, your ship is stolen on the war-torn planet of Ord Mantell, and your hunt to get it back takes you to the Republic capital world of Coruscant.

The smuggler’s story isn’t as immediately engrossing as other classes’ like the Sith Inquisitor, but it does a good job of making you feel like a snarky ship-captain-for-hire. You’ll get access to fun combat tactics, like a blinding flash grenade, a “dirty kick” that stuns opponents, and the ability to take cover behind certain elements of the environment. On top of all that, you’ll eventually befriend your own hairy Wookiee companion. 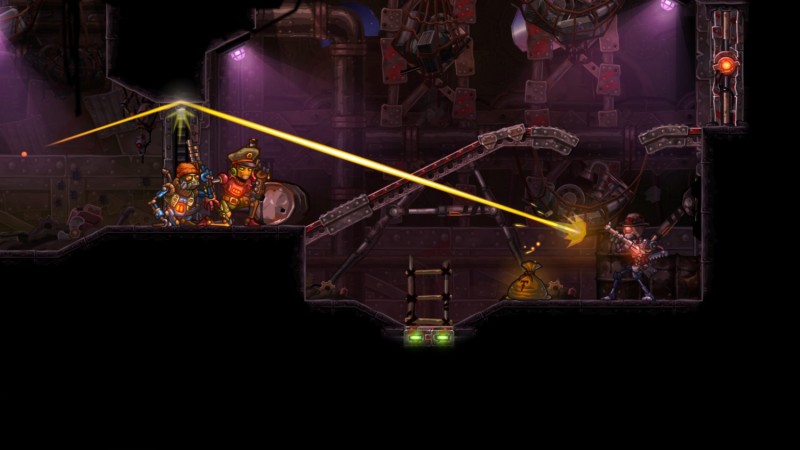 Ducking behind cover doesn't always mean you're safe in SteamWorld Heist, where you and your enemies can bounce shots off walls.

“Tactical” probably isn’t the first word that comes to mind when thinking of Han Solo, but SteamWorld Heist wraps turn-based strategy into an approachable 2D shell. You command a crew of robotic space pirates as they board other pirate ships, defeat enemy crews, and make off with pilfered loot.

The main twist on SteamWorld Heist’s battle system comes from actively lining up your units’ shots to bounce off the 2D environment, creating a mix between XCOM and billiards. When Ben Reeves reviewed SteamWorld Heist on the 3DS, he said he “never grew tired of ricocheting a pistol shot off a wall and into the red eyes of a villainous space thug.”

Getting into a space shootout, hopping behind cover, and pulling off the perfect trick shot to blow away your enemies will make you feel like a true galactic outlaw. You can also hang out on your ship and talk to crew members, or hit up the local space bar to recruit new allies and shop for weapons. The whole experience is presented in an art style that’s even grimier than most depictions of Star Wars’ underworld, but its colorful characters and space-western vibe gives you an experience that scratches that Solo itch. 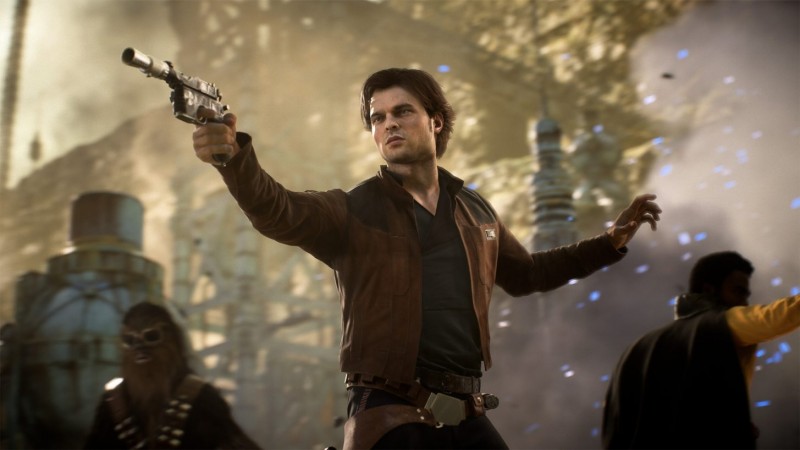 Here’s an idea: If you want to feel like Han Solo, play a game where you can be Han Solo. Battlefront II’s wonderful sound design and beautiful graphics – which led Andrew Reiner to call the game “One of the best-looking games to date” – make it the closest thing you’ll get to playing inside a live-action Star Wars movie.

Han’s three abilities make him a blast to play as. “Detonite Charge” produces an explosive that sticks to surfaces and can be detonated remotely. “Sharpshooter,” ironically, allows him to wildly rapid-fire with his blaster pistol. “Shoulder Charge” allows him to knock over and damage an enemy, à la A New Hope.

If that wasn't enough already, EA just announced a bunch of Solo-centric content for Battlefront II's Han Solo season, including a new map set on Kessel and new skins for Lando, Han and Chewbacca based on their appearances in the new movie. The new content arrives June 12. 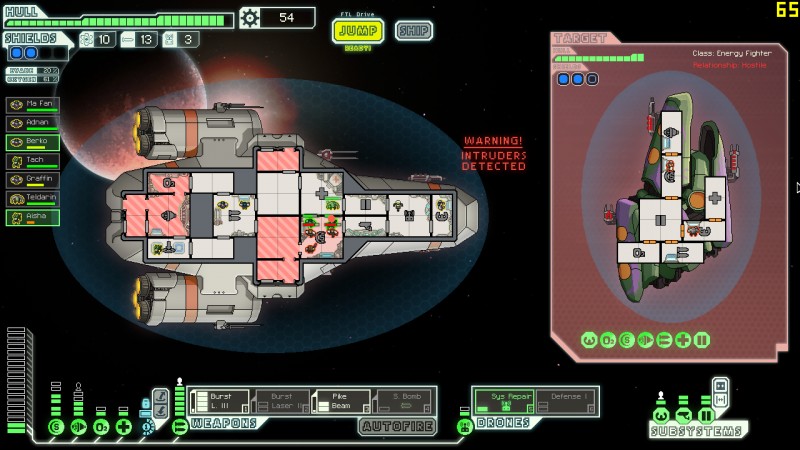 FTL: Faster Than Light is all about keeping your ship together as your enemies try to blast it apart.

Nothing makes you feel more like the captain of a rickety spacecraft than FTL, a top-down roguelike space-combat game where you manage your ship’s crew, life-support systems, and weapons as you flee from an enemy fleet.

FTL’s gameplay feels more like a hard sci-fi Star Trek space encounter than a space-fantasy Star Wars dogfight: You won’t be barrel-rolling or using the force to target exhaust pipes. Instead, you’ll target individual elements of enemy ships with lasers and missiles, destroying their various systems as you struggle to repair your own. There’s something undeniably Star Wars-y about trying to keep your aged starship running, making repairs mid-battle as the crew of the Millennium Falcon often needs to do. Jumping from sector to sector, recruiting alien crew members, and purchasing ship upgrades along the way adds to the feel that you’re forming a ragtag group to heroes to help you survive a threat far bigger than you should be able to handle.

In addition to the tactical decision-making, you’ll also need a good amount of luck. That may not be the best selling point for a strategy game, but it certainly makes you feel like Han when you mix luck and skill to make the perfect escape. 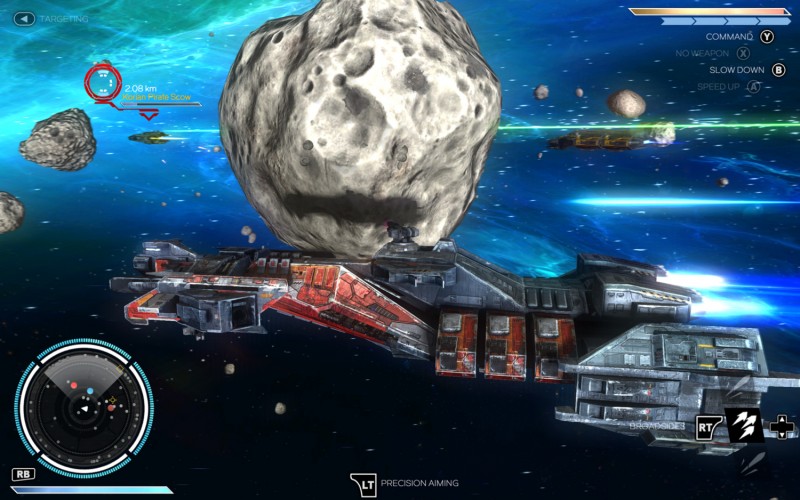 The naval-like combat in Rebel Galaxy allows you to feel like the master of your vessel.

Large-scale multiplayer space simulators like Eve Online allow you to literally smuggle in-game goods for fellow players in exchange for real money. But being Han Solo isn’t about knowing the ins-and-outs of the galaxy’s economic systems: It’s about narrow escapes and shooting first.

Rebel Galaxy isn’t a space simulator (at least not in the same sense as Eve Online), but it does simulate the “space trucker” experience quite well. Since flight is restricted to a flat plane, combat is more like a naval battle than a dogfight, but this – and the fact that it’s single-player only – makes Rebel Galaxy a more approachable choice for those looking to fly their own off-brand Millennium Falcon. Getting a handle on Rebel Galaxy’s economy takes some time, but at least you don’t have the pressure of losing real money (and friends) if you screw up like in Eve Online.

Rebel Galaxy’s main story serves as a vehicle to get players to experience various mission types, in which you’ll hunt for bounties, mine resources, and chart trade routes. There’s also moral choices to keep you interested in the consequences of your actions. Still, when Tim Turi reviewed the game in 2015, he said that the “progression loop of grinding out missions, earning credits to beef up your ship, then taking it back out again is fun, but the mission design felt too familiar to keep me hooked for the long haul.” 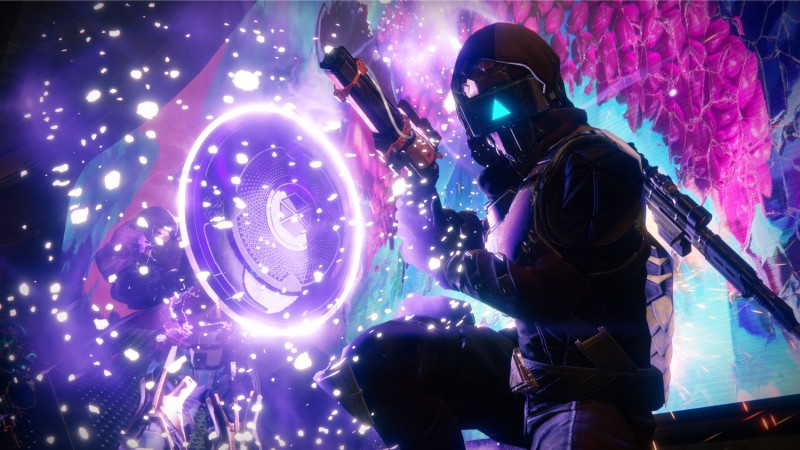 Destiny, like Star Wars, leans heavily into the space fantasy genre. It’s magic and fire swords mixed with spider tanks and rocket launchers – and it’s awesome. Destiny 2 followed the example of the original Destiny’s The Taken King expansion, adding a more fleshed-out story to the franchise to get you invested in the universe.

Picking the hunter class will put you right in that space-gunslinger mindset. In fact, the gunslinger subclass in particular will make you feel like a powerful outlaw. Its super ability grants you a fiery pistol called the Golden Gun that does major damage, and Destiny 2 added a “six-shooter” ability for the Golden Gun that allows you to rapid-fire six shots instead of the usual three. The gunslinger is also a good class for players looking to fly solo in PvE, so it’s a great pick if you’re not too keen on multiplayer games.

The game's new Forsaken expansion arrives on September 4. Shiek Wang, Forsaken's art director, said in a developer documentarty that the team "embraced that western-revenge vibe" for the expansion, so it's likely that Destiny 2 will only provide more content that'll make you feel like a roguish wanderer. 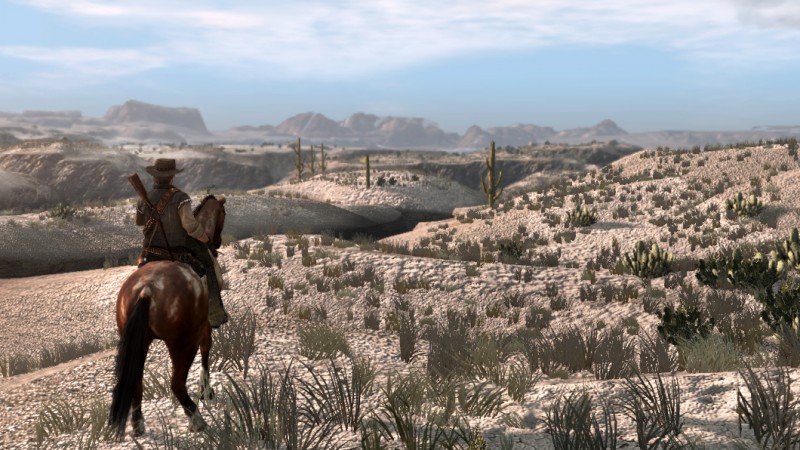 In Red Dead Redemption, you play as Earth-cowboy John Marston as he struggles to escape his criminal past.

While he never rides a horse, Han Solo embodies the roguish charm of classic cowboy anti-heroes. John Marston’s story isn’t as fantastical as Han’s, but Red Dead Redemption is undoubtedly the best cowboy game out there. If the wild and free space-cowboy lifestyle draws you to Han Solo, then Red Dead Redemption is the game for you. You do plenty of “shooting first” with the game’s super fun dead-eye mechanic, which allows you to slow down time and mark your shots before drawing your gun and pumping your enemies full of lead. There’s also a great story and tons of interesting side characters to be found. In fact, Red Dead Redemption’s story and gameplay earned it the number 8 spot on Game Informer’s Top 300 Games of All Time.

And, if it makes you feel more like Han, you can always pretend your horse is a Tauntaun. 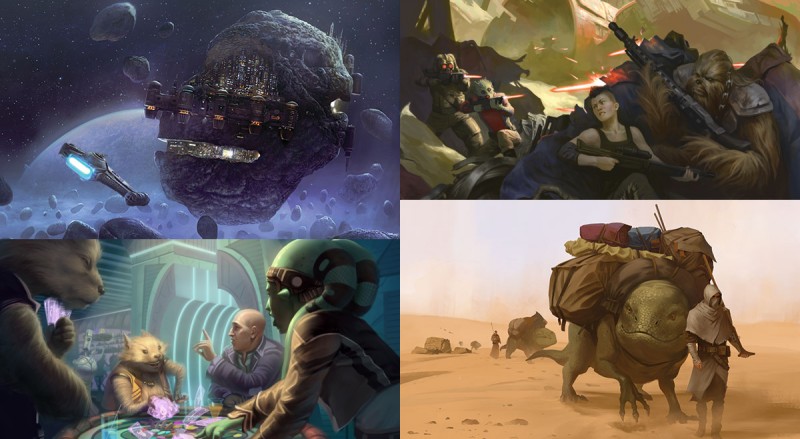 A selection of art from Edge of the Empire's various rulebooks showcases the game's potential for gritty Star Wars vibes.

Though it’s not a video game, Star Wars: Edge of the Empire allows for possibly the most limitless experience of Star Wars’ Han Solo vibes. Edge of the Empire is a pen-and-paper role-playing game that takes place after the events of A New Hope. It focuses specifically on the part of the Star Wars universe you see in Solo – the grimy underworld of criminals and bounty hunters. And it’s more than just set-dressing: The game’s mechanics play into the theme, allowing you to create characters in roles such as big-game hunters, doctors, archaeologists, and scoundrels. The game also features a unique “obligations” mechanic, where you pick a kind of “baggage” that will haunt you throughout your adventure. This serves to incorporate story beats like Han Solo’s debt to Jabba the Hutt into the actual gameplay.

Provided you have a friend to run the game for you, Edge of the Empire can take your adventure to any place and any time in the Star Wars universe. You could even role-play as Han himself if you wanted to, but the real joy of RPGs like Edge of the Empire comes in creating your own character and building out his or her story with your friends. Like most tabletop games, Edge of the Empire can be intimidating at first, but its unique narrative dice system allows for a focus on the story once you’ve gotten used to the rules. If you’re new to the system or to role-playing games in general, the Star Wars: Edge of the Empire Beginners Game is a great way to learn how to play. For more information on Fantasy Flight Games' Star Wars RPG, check out Matt Miller's Top Of The Table.

For more on the galaxy far, far away, check out our spoiler-filled Solo: A Star Wars Story discussion, or Andrew Reiner's Science-Fiction Weekly column on "Star Wars fatigue."