Uneventful Storytelling Drains This Entry Of Its Magic
by Andrew Reiner on Oct 25, 2010 at 07:01 PM In The Force Unleashed, Darth Vader’s crusade to rid the galaxy of the Jedi was interrupted by a young boy named Galen Marek. After slaying Galen’s father, Vader secretly brought on the child as his apprentice. Despite being trained in the dark arts from a young age and carrying Vader’s torch against the Jedi, Galen, under the guise of Starkiller, still clung to the good inside of him. His softer side eventually caused him to fall in love with Juno Eclipse, free himself of his oppressive master, and form a rebellion against the Empire. In the end, Starkiller sacrificed his life to save his friends and give the galaxy a fighting chance against the Empire.

The Force Unleashed II picks up where this tale left off, but it doesn’t focus on the rise of the Rebel Alliance or Vader’s unrelenting quest to hunt them down. In a twist that comes dangerously close to breaking Star Wars’ lore, Starkiller returns as a clone, or so Vader tells him. Haunted by visions of Starkiller’s past and the love he has for Juno, this supposed doppelganger’s mission is to find answers as to why he exists, all while battling or embracing ghosts from a soul that may not be his.

The story starts out with a shaky concept and never finds solid ground. Cameo appearances by Yoda and Boba Fett end up going nowhere. Yoda’s role is relegated to that of an animatronic Disney character in front of a ride, and Boba Fett talks a big game, but never once confronts Starkiller. Boba Fett? Boba Fett? Where? If you can put yourself in the mindset of the prequel movies, where you’re willing to tolerate a groan-inducing narrative for the tradeoff of Jedi doing badass things you never thought were possible, The Force Unleashed II delivers in a big way.

He may be a clone, but Starkiller’s handle over the Force has grown significantly. When a situation calls for improvisation, Starkiller shows a flair for the dramatic. Whether this means beheading a squadron of stormtroopers or guiding a large space cruiser inside of a cloning facility, his actions almost always inspire awe and are usually tied to fun gameplay sequences. He can also turn enemies on their own ranks through mind control – an act that always rewards the player with a hilariously visualized betrayal or suicide. When a battle calls for a little extra firepower, Starkiller turns his Force powers up to 11. With rage fueling his actions, he can bring down a mining droid, an adversary that can normally withstand a dozen lightning blasts and a handful of saber slashes, in one powerful strike.

Combat still has that distinct Force Unleashed feel, but refinements to the mechanics, such as the ability to easily pick up and throw items, make it a more fluid experience. Whether you are Force throwing a stormtrooper or crushing a TIE Fighter, the physics convey a true sense of weight and appropriate visualization. I didn’t have any issues with the lightsaber combat in the first game, but many fans felt it was too shallow. LucasArts addresses this minor irritation with Starkiller’s acrobatic dual wielding abilities. If you don’t want to rely solely on the Force, you can let the lightsabers do most of the talking. The enemy lock-on is the only tool that still doesn’t quite work, as it is solely based on Starkiller’s position.

The texture work and animation, for both Starkiller and his opposition, rank among this generation’s best. LucasArts also went well out of its way to avoid camera clipping. Every shot is framed beautifully, delivering a cinematic view that mimics the motion pictures. The camera work also brings you closer to the action than any Star Wars experience before it.

Many of the environments are set on Kamino or the space around it, which didn’t entrance me like the varied levels in the first game. The only iconic locations are a gameplay-free pit stop at a familiar setting from the original trilogy and a trip to an intergalactic casino that was surprisingly disinteresting. My favorite stage-based moments were the free fall sequences where Starkiller plummets dangerously toward the ground.

Most levels conclude with a repetitive by-the-numbers boss fight. The last boss fight is particularly nauseating; it lasts far too long, is too easy, and concludes with one of the most uneventful send-offs I’ve seen. LucasArts hardly offers a compelling conclusion to this story. Most of the key plot points are open to interpretation, and the logic applied to many of the narrative twists make Vader look like a schizophrenic madman who sabotages his own plans moments after making them.

In a similar vein to the Starkiller clone’s role, The Force Unleashed II is a shadow of its former self. The graceful gameplay offers a higher level of excitement, but the plot and characterization – two large components from which I expect great things from any Star Wars journey – makes this experience one of 2010’s biggest disappointments.

7.75
About Game Informer's review system
Concept
A direct sequel that shatters continuity by reuniting players with a dead man
Graphics
Most of the level designs don’t offer much eye candy, but every little effect and texture detail in them are works of art. This is easily one of this generation’s best looking games
Sound
The voice work for Starkiller is hit or miss, but John Williams’ familiar melodies bring each scene to life
Playability
Lightsaber combat offers more depth, and the Force powers are as explosive as ever. The enemy lock-on still brings frustration
Entertainment
Short, yet far from sweet. The story holds an otherwise fun game back
Replay
Moderate 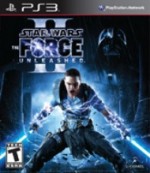