Pinball mavericks Zen Studios have come up with a pair of new Star Wars tables based on the new movie The Force Awakens, and you can join the Resistance or The First Order next week.

The first table is suitably called The Force Awakens table, and traces the events of the movie from the side of the Resistance featuring characters like Rey, Finn, and Poe. It features a dozen story modes, and the table transforms to transport players to the film's different locations. You can get a brief glimpse of the action on Jakku in the teaser trailer after the jump.

Might of the First Order tasks you with keeping those pesky systems in line across the galaxy. You'll control your own star destroyer (including a magnetic upside-down ramp) and expand the rule of the First Order and control various territories.

Star Wars: The Force Awakens pack comes out the week of January 12 for $4.99 on PlayStation 4, Xbox One, PC, PlayStation 3, Xbox 360, PC, and Vita via the Zen Pinball 2, Pinball FX2, and Star Wars Pinball platforms. The tables can also be bought individually in-app on Mac for $2.99 and on iOS, Android, and Amazon mobile devices via Zen Pinball and Star Wars Pinball for $1.99. 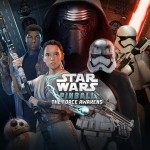