Scribblenauts Unmasked asks players to comfort a teary-eyed Bruce Wayne moments after he witnesses the death of his parents. He can’t be conversed with, nor can he be pulled in for a hug; the only solution available is using a magic notebook, which transforms any word written on its pages into an object. What item could calm a grieving child? My first thought was to hand young Wayne a handkerchief. He took it from me, but his tears didn’t slow. My second attempt was creating a car to drive him away from this grisly scene. He climbed in to the passenger seat, but again his mood didn’t change. Not knowing what the game wanted from me, I wrote “giant cheeseburger” into the notebook, and a tower of meat and buns almost the same height as Wayne appeared onscreen. I handed it to him, and his tears vanished. A word balloon from Batman appeared: “From that night forward I vowed to destroy crime.”

Although this entry of the Scribblenauts series is set within DC Comics’ universe, it hasn’t lost its goofy charm, or its ability to turn a straightforward objective into a wildly imaginative exploration of ideas – even if the solutions are sometimes befuddling. The comic-book tie gives players more word-based ammo to play with, and knowledge of DC’s lore – though occasionally helpful – isn’t required.

At any point during play, the Batcomputer can be accessed to bring up lists for all of the heroes, villains, vehicles, equipment, and teams featured in the game. As a comic fan, my first hour was spent scrolling through the database of characters to see who made the cut and who didn’t. Oddballs like Blubber (the humanoid whale) are not included, but I was surprised to see many of New 52’s characters like Talon present. Typing in “Batman” brings up 34 different versions of him, including most of Grant Morrison’s variations that we all want to forget about. Almost every character I summoned was equipped with his or her signature powers and weaknesses. Little touches like Batman refusing to use firearms are also present. Players can also create their own characters, customize their behaviors, equipment, movement, and scripting, and summon them at any time by inputting their names. My feared Cowman gave Superman a run for his money.

If heroes and villains share the same frame in a comic book, a punch is usually thrown. The same goes in Scribblenauts Unmasked, only you may not be able to pinpoint who threw the punch. Characters charge headlong into each other, melding into an indistinguishable pile of thrashing body parts, elemental blasts, and onomatopoeia.

Combat is Scribblenauts Unmasked's kryptonite, and Maxwell engages in it just as much as he uses his notebook. This is a change in direction for the series; the star-grabbing puzzles are still here, but they share the spotlight with combat. Unfortunately, this happy-go-lucky kid isn’t exactly the most coordinated or skilled warrior. Maxwell’s punches are slow and lack range, perhaps a little too true to his character. He can wield almost any weapon the player can dream up, but no firearm or prized trident makes the frays enjoyable. I cheesed the adjectives “super” and “giant,” which raise Maxwell’s offensive and defensive capabilities to the point of him being Hulk-like, and simply jammed on the attack button to swat away the enemy swarms. One-on-one battles are easier to read, but fall victim to uninspired repetition.

A few of the combat scenarios push the player to come up with creative solutions to stop specific foes. I enjoyed most of these tests, as they feel more like extensions of Scribblenauts' traditional gameplay formula.

These moments are usually tied to story missions. Yes, Scribblenauts Unmasked places Maxwell and his sister Lily in a surprisingly wordy narrative that has the duo hunting down an evil Maxwell doppelganger sporting a magic book of his own. While this story is mostly a vehicle to shuttle the protagonists to iconic locations filled with iconic characters, the conflict is fun to follow and delivers some amusing moments for DC Comics fans.

Most of the content is aimed at this crowd. Bonus origin stories, Mxyzptlk periodically showing up to propose challenges, and Maxwell taking a slight jab at the number of Flashes in the universe are just a few of the examples.

Outside of the narrative-driven critical path, side missions are randomly generated each time the player enters a new location. These missions don’t often have ties to the particular locales, and are more in the vein of traditional Scribblenauts objectives. I was in Gotham City, yet my tasks were to play volleyball with a citizen, turn a Green Lantern’s cow green, and find a way to cover up Krona’s bald spot.

I enjoyed Scribblenauts Unmasked's encyclopedic exploration of DC's universe. Many of the puzzle challenges are also quite clever in their design and solutions. I just wish the heroes and villains would put aside their differences. In most cases, when they come to blows, the experience turns into a bothersome mess.

7
About Game Informer's review system
Concept
A thorough exploration of DC Comics’ long-running universe turns ugly when its heroes and villains lock in battle
Graphics
Despite the simplistic art style, most of the characters look just like their comic-book counterparts. Combat animations and effects are crude and hard to follow
Sound
When battle ensues, the soundtrack doesn’t change to follow the fray. Punches are thrown to peaceful city-based melodies
Playability
The Wii U GamePad handles word entry and location traveling beautifully. Controlling Maxwell isn’t so easy. His basic actions are sluggish, and his punches are held too close to the chest
Entertainment
Comic fans will get more out diving deep into DC Comics’ history. The shoddy combat mechanics pollute most of this experience
Replay
Moderate 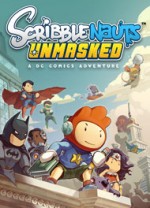