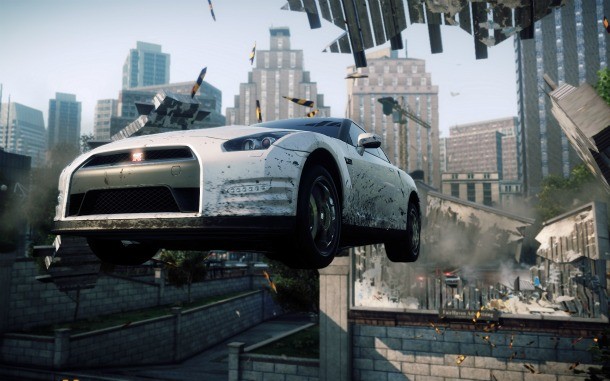 Update: Trailer added. Criterion is back with Need for Speed Most Wanted, and the game's open world structure contains endless ways for you to find your fun.

I instantly noticed a number of similarities to Criterion's Burnout Paradise in Most Wanted. It's an open world where races, cops, and numerous objectives are all there to discover just by driving around. You're never at a loss for something to do. Go find new roads, smash through billboards, race through speed camera zones, and of course, escape the police.

All these activities are tabulated (including a variety of metrics such as your longest jump, drift, high speed, etc.) and instantly comparable among your friends via the game's Autolog feature. If you view the game's map, you can see your friends' accomplishments pop up where they executed them, as well as a feed of challenges, and more.

I jumped into a multiplayer demo of the game (it supports up to 12 players), and you can set up your own playlists of race events for you and your friends, or they can be generated for you automatically. Once the racing starts, everyone is dumped into the world and must race to a meeting point where the events will begin. This structure is repeated every time you end an event and transition to the next one. It's a very cool way to let you play multiplayer without having to be dumped back into a boring menu lobby at the conclusion of a race. It also gives you a few minutes to tool around and just explore.

After racing to the spawned meeting point, we went through a normal race, a challenge to see who could get the most air over a freeway, a speed test (where you try to go the fastest along a particular road), and a team race.

After each event rewards popped up onscreen instead of a loading menu (like the supercharge upgrade, a new license plate, or car), we met up at a new meeting point, and then we were off again. It was a very fun and fluid way to hang out with friends and race. Unfortunately there are no cops in the game's multiplayer mode.

Of course, Most Wanted feels like a Criterion game when you're behind the wheel. The racing is fast, the damage is spectacular, and the car's handle well without being neither overly twitchy nor too arcadey.

I also played a short single-player portion that blended different racing events with spontaneous cop chases. To aid your escape from the law, you can find jackspots (hidden areas that contain supercars you can get into) and pass through gas stations that change your car's paint scheme on the fly.

Addressing an issue some gamers had with Burnout Paradise, Criterion says that it's still deciding if it wants racers to be able to teleport to races on the map or require them to driver there in the world.

Criterion is a developer that has a storied racing pedigree, and Most Wanted seems to be a nice marriage between some of things its done in the past with Burnout Paradise with one of EA's most beloved racing franchises.