Earlier in the month, a team of former Hitman and Payday developers revealed Mutant Year Zero, a turn-based tactics game that integrates stealth, exploration, and narrative elements into the XCOM formula. At GDC, we got our first chance to see the game in action.

Mutant Year Zero is based on the Mutant Chronicles pen & paper RPG, which was hugely popular in Sweden during the 90s. After entertaining the idea for years, former Hitman gameplay programmer David Skarin approached fellow I/O Interactive veteran Lee Varley about taking on the project. With Payday designer Ulf Andersson on board in an advisory capacity, the team landed the rights to the license as well as a publishing deal with Funcom, whose CEO, Rui Casais, is an unabashed turn-based strategy enthusiast.

The story is set in a post-apocalyptic world where most remaining survivors have mutated in some fashion. The group this game follows all live in a shantytown built on top of a bridge they call the Ark. This base is home to The Elder, the only person old enough to have a connection to the world before the nuclear fallout. He doesn't tell too many stories about the past and doesn't want his people to venture out too far into the zone – a graveyard that expands the world beyond them. Unfortunately, they have to given their lack of water, supplies, and food.

We join a trio of adventurers right after they emerge from a military bunker complex in the Swedish countryside where they saved a lone survivor from a ghoul attack. He tipped them off to an enemy camp located further into the forest. They've stolen an electrical generator that would greatly benefit the Ark if they were able to get their hands on it.

Moving into the forest, the demos shows off the real-time movement around the environment. While casing the area, players can find hints, lore, and maps that can aid them down the line. Gaining an understanding of your surrounding can also reveal great tactical advantages as well, like vertical positions and strong cover.

The squad continues to move through the densely wooded area – these discrete mission areas are hand-crafted sandbox sections that you are free to explore. The squad spots a couple of enemies on the perimeter. The rings around them indicate what they can see and hear, giving you an idea of where it's safe to move without getting engaged in a turn-based battle. Pre-planning is key during encounters. If you step inside the ring, the enemy gains the immediate advantage. In this case, the squad gets into position and initiates the turn-based combat. With the advantage of an ambush, they take the ghouls out quickly with silenced weapons. Mutants all have weird sets of skills (called mutations). In this battle, we see Duck use a "moth wings" ability where he can hover above the enemy and get a bonus on critical hits.

Since no one else heard the attack, the game switches right back to real-time, allowing the team to further move ahead. The one caveat to returning to exploration mode between combat scenarios is your skills still operate on cooldown timers, so you can't spam them at the start of each battle. While snooping around the squad takes out one more enemy on the perimeter and then levels up. When you level you can spend points to buy mutagens. These are not locked as in traditional skill trees – you can pick and choose as new ones become available, and you can hot-swap them at will as long as you're not in combat. This allows you to assess a situation and make the determination of which major, minor, and passive abilities you think could best help you in the skirmish.

Before continuing further, the group heads back to the Ark using a fast travel portal. Players have several interaction points at their base, including a workshop for upgrading.modifying weapons, a bar where you can pick up the latest gossip or trade in artifacts for bonuses, a market for supplies, and visiting the Elder. The team stocks up on grenades and then returns to the camp. You can return right to the same spot you left off in a mission as long as you bring back your same squad.

Approaching the camp, the squad splits up, allowing you to position your party members in various advantageous areas. The duck heads up to a tower, while the human Selma and the boar named Bormin flank the perimeter and find an old war machine mech in a barn. This must be why the ghouls needed the power generator. Because they found the robot's instruction manual earlier in the game, Bormin can sabotage the robot so if the enemies try to activate it, its guns will turn on them immediately.

Once everyone is in good position they begin the fight with Bormin ready to activate a stoneskin ability that aggros enemy, Duck in a great sniping position, and Selma providing overwatch. The fight plays out as they expect, with the robot turning on its masters and creating chaos for the defenders. The trio takes some damage and gets in some dicey spots during the fight, but emerge victorious thanks to a healthy amount of grenades and using cooldown attacks at the right time.

If the fight went south, it has consequences based on your difficulty level. The easy mode users can escape relatively unscathed, but permadeath lingers over your every move in the higher difficulties. As you play through the game you will come across new characters to join your party, but as with games like XCOM you'll want to make sure you take care of your best soldiers.

Mutant Year Zero: Road To Eden is scheduled to release on PlayStation 4, Xbox One, and PC later in 2018. When we asked about porting the game to Switch, The Bearded Ladies admit they are looking into it. 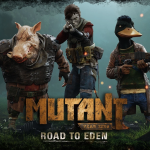