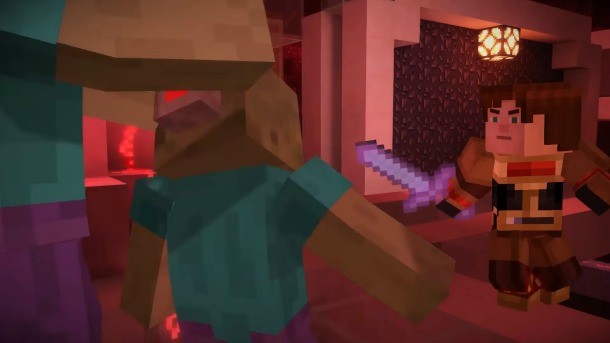 The first four episodes of Minecraft: Story Mode gave Jesse and friends the task of taking down the Wither Storm in one cohesive narrative arc, while subsequent episodes have explored not only different locales and storylines, but distinct genres as well. The most recent episode, A Portal to Mystery, placed The Order of the Stone into an entertaining whodunit. With Access Denied, Telltale explores yet another direction as it takes a step into post-apocalyptic science-fiction in my favorite episode since the conclusion of the Wither Storm saga.

The episode hits the ground running, immediately presenting a fun opening montage of the group jumping from world to world. This collection of scenes gives us an idea of how long the team has been wandering through the hall of portals, trying to find the one that takes them home. I enjoyed watching a quick look at all of the adventures the team has been going on since the last episode, and it set the stage for the inevitable frustration that sets in after wandering for so long to no avail.

After an argument as a result of this frustration, the team decides to take a redstone-lined portal, since that could mean intelligent people are on the other side. Unfortunately, when Jesse and friends emerge from the portal, they're in a desolate wasteland ruled by a corrupt computer called PAMA. Every living creature - from zombies and spiders to humans - is controlled by PAMA through redstone computer chips embedded in their skulls. This dystopian setting is both unsettling and unfamiliar to those who have followed Minecraft: Story Mode to this point, and it offers a refreshing change of pace.

My favorite moments of this episode were my interactions with PAMA. The charming emoticon expressions on the giant computer monitor were fun to watch as I answered his questions in a variety of ways. PAMA's constant curiosity about my adventure made him both fun and menacing, as his line of questioning quickly turned to a desire to send his slaves to other worlds on conquering missions.

The episode revolves around Jesse formulating a plan to fight PAMA, free the world from his digital chains, and find a way back to the hall of portals. The premise may sound simple, but it managed to surprise me on a few occasions. I don't want to spoil it, but I loved how this episode uses your friends to raise the stakes.

PAMA is the most entertaining and threatening antagonist the series has seen since the daunting Wither Storm. For the first time since the end of that original saga, I felt as though I was leading Jesse against similarly insurmountable odds. With PAMA in Episode 7, I not only felt like Jesse and friends were facing off against an intelligent and capable adversary, but literally the whole world was against them as the A.I. sent those under his control after them.

This situation results in exciting quick-time-events and several fast-paced sequences as you duck, dive, and dodge the hordes of mindless lackeys. The series has also gotten better about its puzzles, as they have been streamlined and simplified to prevent halting the pacing. One such puzzle has you wandering through an underground cave, figuring out which item to place in the chests of robotic greeters. It's a simple puzzle that doesn't take long to solve, but it still required a bit of thinking to get it to the point of being able to progress.

The only creature not under PAMA's trance is Harper, who is one of the most interesting peripheral characters Telltale has added since the series' start. Discovering her backstory is part of the fun, and I liked learning all about her and her past as the episode progressed.

While the story is enjoyable from start to finish, the same issues that have been present with Minecraft: Story Mode from the start continue with this episode. The biggest issue has always been that I don't feel as though I'm truly shaping the story, and that my decisions don't have big consequences. With the higher-stakes moments that I mentioned before and just one episode remaining, I thought I might actually see one of my decisions come back to bite me. Unfortunately, I was proven wrong, as the end of the episode rolled around and all was reset back to maintain the status quo with all characters involved.

The gameplay is also feeling less enthralling with each passing episode. The quick-time events are still fun, but other action scenes feel as though I've done them before.

Access Denied is a strong episode that tries new things and relies on familiar elements to mostly good results. I enjoyed going up against the massive threat of PAMA and fighting to save the world from his rule, and the action supports that thrilling premise. This penultimate episode does everything it needed to excite me for the final episode in this season of Minecraft: Story Mode.

The penultimate episode of this season of Minecraft: Story Mode is the best since the conclusion of the Wither Storm saga.

Purchase More Info
8
i
Game Informer's Review System
Concept Take the gang to a desolate world ruled by a corrupt A.I. overlord and task them with saving it
Graphics The signature Minecraft look carries into this episode, though small visual glitches happened occasionally
Sound The music and sound effects have all been heard before in the series, but there's something fun about listening to the A.I. PAMA react to Jesse's actions and replies
Playability With numerous quick-time events and enemy encounters, the action continues to be the highlight of the series
Entertainment Though the gameplay is familiar and the decision-making is still lacking, Episode 7 delivers one of the strongest stories yet
Replay Moderate