Marvel’s superdeformed toy line seems like a perfect concept for a cartoon series, with stubby caricatures of its heroes and villains battling it out in a format more suitable for younger fans. Its first foray into video games, last year’s Marvel Super Hero Squad: The Video Game, wasn’t as successful. THQ has given it another shot with the Infinity Gauntlet, and while it’s not quite a heroic effort, it’s getting closer.

The family-friendly title allows two players to team up against Dr. Doom, Thanos, and more Skrulls than you can shake a hammer at in a cooperative experience, and it supports four players in challenge modes.

The story, loosely cribbed from the animated series’ first season, concerns two all-powerful artifacts: the infinity sword and the infinity gauntlet. After a mix-up at a store, the heroes learn that Thanos is trying to acquire the six stones required to fully power the magical glove. That’s all the info our heroes need to know before suiting up and mobilizing against the villains.

Each hero brings his or her own talents to the battlefield. For example, Hulk punches through walls, Sue Storm activates teleportation portals, and Iron Man hacks computer terminals. Your choice of heroes is predetermined for each level, so you don’t get to change characters around until you visit the game’s free play mode (which is also a sneaky way to prevent you from discovering all of a level’s secrets during your first playthrough). It’s satisfying on some level to collect every last stone shard, but it never feels mandatory. Unless you’re dead set on unlocking every last costume or bonus stage, one playthrough is more than adequate.

The bulk of the action plays well, even though the combat is as lackluster as it gets. As you pound (or beam) enemy faces in, a meter fills up. Once it’s filled, you can unleash large-scale attacks. Other than that, you’re generally limited to a couple of melee and long-range attacks.

The game falters when it strays too far from this simple action. Puzzles are generally time wasters rather than anything that would strain a player’s mind. Shooting sections are extraordinarily easy, aside from one frustrating battle against Galactus. Part of the frustration comes from the awful AI companion; if you’re planning to play this alone, you should reconsider. Even though you can easily switch between the two characters, some of the puzzles become unnecessarily tedious because of the AI’s inability to help. Instead of standing on a platform and having your companion lift it up for you, you have to move to the platform, switch to the other character, perform the action, and then repeat the sequence. It’s not enough to make you want to permanently hang up your tiny tights, but it’s grating.

Despite its shortcomings, Marvel Super Hero Squad: The Infinity Gauntlet is a charming game. Even during the Galactus battle, it was hard not to smile while fighting the planet-hungry giant by firing tacos into his mouth from a flying truck. It’s just a shame that Infinity Gauntlet’s gameplay doesn’t quite measure up to its abundant humor.

6.75
About Game Informer's review system
Concept
Take pint-sized versions of Marvel’s elite (and a few from its Z-squad) and throw them into a kid-friendly brawler
Graphics
Characters are faithfully represented from the toys and animated series, though environments are on the bland side
Sound
The voice acting is hilariously over the top, and the rousing score gets the job done
Playability
If you can possibly round up a friend, do so. The partner AI is abysmal
Entertainment
If you’ve burned through all of Traveller’s Tales’ LEGO games and are looking for a similar (slightly downgraded) challenge, look no further
Replay
Moderate 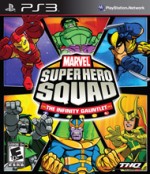